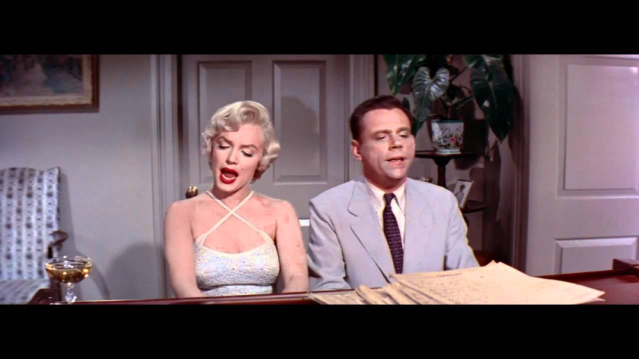 “Here’s a clip of the upcoming Blu-ray Disc release of 20th Century Fox Home Entertainment’s “The Seven Year Itch” starring Marilyn Monroe. I do not own this clip, it’s only being used for promotion of the Blu-ray.”

Everything Marilyn Monroe did was adorable and I love this scene from The Seven Year Itch because it stars a married man whose wife and son are away for the summer at a lake in upstate New York. So this successful New York advertising man has this big apartment to himself for the whole summer in New York and if you don’t think New York summers are hot enough, well first spend some time in Washington and Maryland. For this guy, played by Tom Ewell, summer gets even hotter when Marilyn Monroe’s character moves into his building.

This is a great innocent scene with two people spending quality time with each other. He has this hot baby all to himself and he plays the innocent. They eat potato chips with wine together and play the piano and just talk to each other as friends.

He could have started an affair with her. He actually makes a small play for her, perhaps out of his drunken fog. As someone who doesn’t drink that much normally and perhaps had too much to drink. Perhaps he thinks he’s imagining that there is this goddess in his apartment and wants to touch her to see if she’s real. But when he’s sober, they would only just have fun together.