By 1968 the Republican Party was definitely moving right ideologically, with Barry Gooldwater and Ronald Reagan having enormous influence in bringing to the GOP what would be called conservative libertarians today. And Richard Nixon with his 1968 presidential campaign did a lot to bring in what is now called the Religious right, but the GOP still had a solid progressive faction led by Governor Nelson Rockefeller of New York and others whom the GOP leadership had to take seriously. 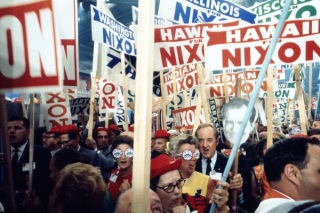