To understand the impact of Earvin Magic Johnson and Larry Legend Bird and what they meant and mean to the National Basketball Association (NBA), you have to know the state of the NBA in the late 1970s and how far the league went down from where it was by the late 1960s and early 1970s. The NBA Finals were played on tape-delay television to use as a great example, which means the network at this time, CBS, recording the game and producing the game with CBS Sports and then CBS Sports playing the game after the late local news, instead of the game being aired at 8 or 9 pm when the game was played.

By the time the 1980s were over, the NBA was right there with the National Football League. The NFL at its height of popularity because it had so many prime and great games on national TV because of two men and two teams: Earvin Magic Johnson and Larry Legend Bird and the Los Angeles Lakers and Boston Celtics. The two best players of this era, if not all time, going head-to-head from opposite conferences, having to beat the other to accomplish what they wanted to do, which was to be the best by beating the best, which was the other team with its great player.

The great NBA basketball head coach Pat Riley, who also happened to be the Lakers’ head coach in this era has, I think, the best and most accurate way to describe Magic and Legend, saying they were about team first and team last and everything else in between. Being the best by beating the best and winning as many NBA Finals as possible and all the championships they could handle for one career, they did by being the best two best team players of their era, if not all time, and they did this for an entire decade plus a couple of seasons.

One thing about Magic and Legend is that they needed each other to be as great as each. They were only interested in two things, which were to win the NBA Finals over and over and to be the best player in the game. Without the other and without the Lakers pushing the Celtics and vice versa, the competition with each other and those two great franchises being from different conferences, meaning they would play each other in the NBA Finals, that competition and push I believe got the best out of both players and both teams. 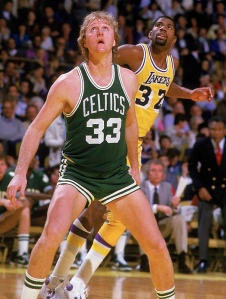