Forget about what the guy with the big mouth doing the commentary in the video. The O’Reilly-Bachmann exchange represents exactly what is wrong with the Republican Party right now. And Bill gave Representative Michelle Bachmann all the opportunity possible in about four minutes. When the asshole wasn’t speaking to make it clear that the GOP is the NMP right now the No Message Party. Because they do not have a unifying message because they are the opposition party. Without a clear frontrunner for 2016 so they got these tribes who really just speak for themselves instead.

I almost fell asleep listening to Cathy McMorris-Rodgers response to President Obama at the State of the Union a couple of weeks ago. And keep in mind I’m an insomniac and I don’t fall asleep very often. But at least there was some point to her message. Someone coming from middle class small town roots to the big time as member of the Republican Leadership in the House of Representatives. But with Michelle it is two minutes of what that she’s pro-American, apple pie and motherhood and so-forth.

Michelle Bachmann represents exactly why IQ tests should be required for anyone in Congress to serve on the House or Senate Intelligence committees. And thank God she only serves on one of them. Because give her one topic and you get competing messages on the same topic. As well as her volunteering other topics to talk about in a span of two minutes. And I wish this Congress could only end tomorrow so she is no longer in the House which she is retiring from at the end of this Congress. 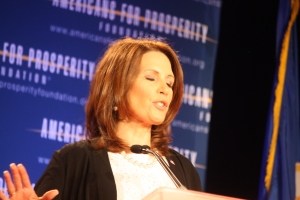