The Federalist: Opinion: Fred Cole: Sweat The Details Later: The Case For Libertarians Working Together 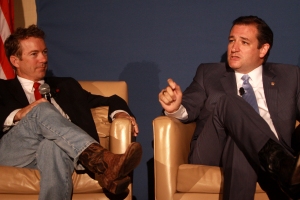 The Federalist: Opinion: Fred Cole: Sweat The Details Later: The Case For Libertarians Working Together

This is the debate that the Republican Party should be having right now. Between Libertarians the Ron Paul’s of the world and the Conservative libertarian branch the old Barry Goldwater/Ronald Reagan wing of the party that seems to be led by Senator Rand Paul. And I would add Senator Mike Lee, Senator Ron Johnson and Senator Jeff Flake to that list as well. Because these are the real Conservatives in the Republican Party. Not the Far-Right faction of the Tea Party. But the Conservative Libertarians in the party.

The Republican Party will not be a governing party again at the national level which means controlling the White House unless they bring in new voters. And as big government is more unpopular both from an economic and personal point of view, Republicans need to drop big government and their Far-Right and get back to their conservative roots. If they expect to be able to compete with Democrats for the new voters that they need. Latinos, Asians, Jews, economically conservative African-Americans.

Right now the competing factions in the Republican Party that could actually move it forward and beyond their Bible Belt Neo-Conservative base, it’s the Ron Paul classical libertarian branch. The Rand Paul conservative libertarian branch and the establishment the leadership in the Republican Party. That is supposed to look out for the best interest of the GOP that tends to be economically and foreign policy oriented. And not so much interested in the social issues.

The conservative libertarian branches of the GOP is how they move forward and become a governing party again. That would even win back the U.S. Senate as well. Because they could tell Americans especially younger Americans that they have an economic message that young people could like. And they’re not trying to run their personal lives for them. Because the Religious-Right and Far-Right in general no longer runs the Republican Party.