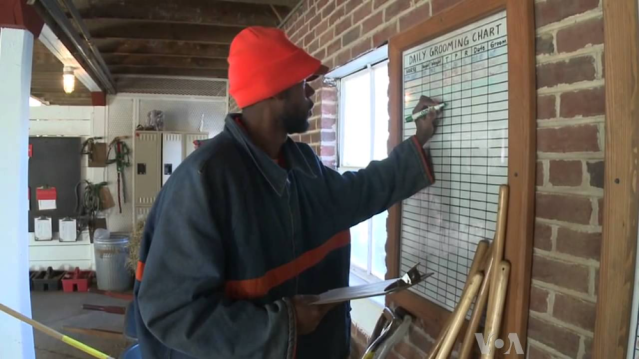 Source:VOA News– an ex-inmate at this prison who now works there as a freeman.

“An innovative program in the United States is giving man and beast a second chance at life. VOA’s Julie Taboh takes us to a prison farm in the state of Virginia where inmates are gaining valuable job skills as they learn to care for retired racehorses, that in turn receive attention and a well maintained facility.”

“Voice of America (VOA or VoA) is the state-owned international radio broadcaster of the United States of America. It is the largest[3] and oldest U.S.-funded international broadcaster.[4][5] VOA produces digital, TV, and radio content in 47 languages which it distributes to affiliate stations around the globe. It is primarily viewed by a non-American audience.

VOA is headquartered in Washington, D.C., and overseen by the U.S. Agency for Global Media (USAGM), an independent agency of the U.S. government.[8] Funds are appropriated annually under the budget for embassies and consulates. In 2016, VOA broadcast an estimated 1,800 hours of radio and TV programming each week to approximately 236.6 million people worldwide with about 1,050 employees and a taxpayer-funded annual budget of US$218.5 million.[9][10]

Voice of America is generally viewed as positive from many foreign listeners,[11][12] while a smaller listening percentage consider it to be a form of propaganda.”

This is exactly what prison inmates in general population who want to build their lives and become productive in life should be doing, which is working. But working in a field with the skills needed so they not only have good jobs in prison, but also now have the right job skills and job experience needed to get themselves a good job once they leave prison. And not need to come back to prison because now they have the skills they need to do well in life legally.

This is a much taxpayer investment than to lockup inmates all day except for their meals and yard time and perhaps doing a few chores, that is for inmates who are in general population, where all they learn there is how to become better criminals.