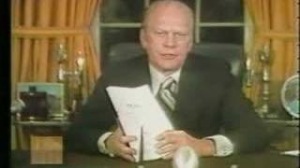 This piece was originally posted at FreeState Plus WordPress Blog

President Ford, showing a lot of leadership in 1975, taking on energy policy and even energy independence. Figuring out that the energy shortages of the early and mid 1970s were bad for the economy as a whole. Not just energy production, as well as our foreign policy having to rely on other countries that aren’t very dependable, to provide a huge superpower with energy. And that if America could produce more energy on our own, it would benefit both our economy as well as foreign policy. The Great Deflation, is how you could sum up the American economy in the 1970s.

Part of that having to do with the fact that even though America has about the most natural resources in the world, perhaps only Russia, has the ability to produce more energy for their own country than America and yet we were dependent on other countries for our energy supply. Because we haven’t up until lately, the last few years, done a very good job of developing all of our energy industries. Oil, gas, natural gas, nuclear, solar and wind. We produce all of these resources and have the ability to be leaders in all of these resources in the world and become energy independent. But haven’t done a very good job of moving these energy resources along.