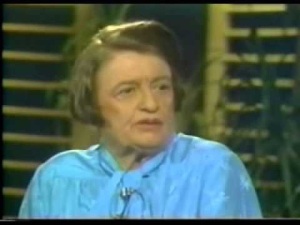 Ayn Rand on Russian communism on the Phil Donahue Show from 1979, saying that Russian Communists believed that people weren’t people. But collections of the state, subjected to whatever the state wanted them to do. The difference between authoritarianism and liberal democracy. With authoritarianism depending on what type of authoritarianism we are talking about, it’s all about the state. A big centralized government, where all power is centralized in one political party generally.

And the people are there not to live their lives, but to serve the state. And once they get out of line, decide to live their own lives, or speak out against the state, they do that at their own risk. And risk severe harm to not only them, but their families as well. Just one of many difference between living in an authoritarian state which is what Soviet Russia was, or living in a liberal democracy like the United States. In a liberal democracy and free society, people tend to control their own lives. And then have to deal with the consequences of their decisions for good and bad.

In a communist state, to use as an example, individuals don’t exist. It is all about the state and the state is the society. Meaning the big central government decides what everyone needs and what everyone can do and use and just about everything else. Everyone in the country, is there to serve the state and especially the Communist Party and communism. Not there to make the best out of life that they can for themselves and their families. If freedom scares you and you don’t think you would be able to manage your own life, trying doing time in jail, or prison. Or living in a communist society, because freedom won’t be something that you would ever have to deal with.