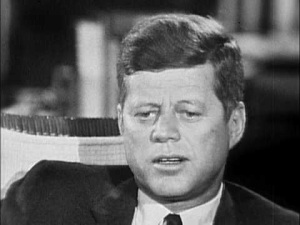 Jack Kennedy came to the White House in 1961 with a broad agenda that included civil rights for African-Americans, Federal aid to public education, health insurance for seniors and an economic plan to deal with an economy that was slowly coming out of recession from the late 1950s, that included a deep tax cut. And yet most of his domestic agenda stalled in Congress despite having large Democratic majorities in both the House and Senate. And spent most of the first two years dealing with foreign policy. With Cuba twice both involving Russia, the Bay of Pigs fiasco and of course the Cuban Missile Crisis.

President Kennedy, did have a foreign policy agenda as well and was a tough Liberal Cold Warrior that wanted to open discussions with Russia. But wasn’t prepared to be soft with them, but take them on. And spoke out for liberal democracy not only in America, but in Europe as well, but wasn’t looking for a war with the Soviet Union either. And in the middle of 1963, finally took a tough stand when it came to civil rights for African-Americans and liberal democracy for them. Who were being discriminated and beaten in the South with the violent beatings that were happening in Alabama and Mississippi.

We’ll never know how successful of a President that Jack Kennedy would’ve made, one of the tragedies of his assassination. But he had all the tools of becoming not just one of the best Liberal Democratic president’s we’ve ever had, but one of the best president’s we’ve ever had as well. Just by what he believed in, but also how he handled the issues that came his way. The Cuban Missile Crisis and finally taking on Civil Rights as well in 1963. The question is how effective he would’ve been how he been able to complete his first term. And he been reelected, he effective he would’ve been at getting his agenda through Congress. Something he wasn’t very successful at in his first two years.

President Kennedy, was very popular when he died I believed, because of his handling of the Cuban Missile Crisis and because he was very likable personally. Which are the advantages that President Obama has today. But wasn’t very good at making Congress go along with his agenda based on his personal appeal. Had President Kennedy completed his first term, he would’ve continued to work on the issues, that he ran on as President. Across the board tax cuts, what later became known as Medicare, Federal Aid to public education and civil rights. And then the question would’ve been how successful he would’ve been at pushing that agenda through Congress.