American Conservatism is about freedom and Americans being able to live independently of the state, especially the Federal Government. As far as being able to pay our own bills, our living expense and so forth. And that Americans should be able to live their own lives as they see fit as long as we are not hurting innocent people with what we are doing. Senator Goldwater even believed in the right to collectively bargain, just as long as workers weren’t forced to join labor unions. Barry Goldwater’s politics didn’t change as some Republicans and others have charged today. The Republican Party has changed to the point that Senator Goldwater couldn’t win the Republican nomination for President today.

Thats how far to the Right the party has moved. When Senator Goldwater left Congress in 1987, the Republican Party was still the Conservative Party in America. Now it’s probably the farthest right party that we have in America and that’s different. Barry probably could win the Libertarian Party presidential nomination. Even though they probably wouldn’t of liked his foreign policy views. Senator Goldwater wasn’t an isolationist, but other than that he would’ve fit in very well with the LP. And they would’ve taken him. But the Religious-Right would’ve tried to kick Senator Goldwater, Mr. Conservative out of the GOP.

Barry was a real Conservative. Senator Goldwater wasn’t interested in things like homosexuality and pornography, he had a gay grandson. And his famous line about Gays in the military, was that he didn’t care if soldiers were gay or straight, but could they shoot straight. He also said that the religion doesn’t belong in politics as it relates to policy and that abortion isn’t a political issue. But freedom of choice issue. And that he didn’t want Big Government in his wallet or bedroom. All reasons why he wouldn’t fit into the Republican Party today. 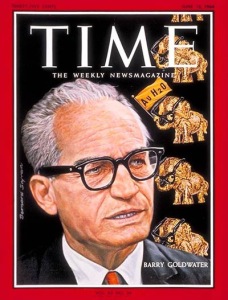