Posted on September 6, 2011 by Rik Schneider 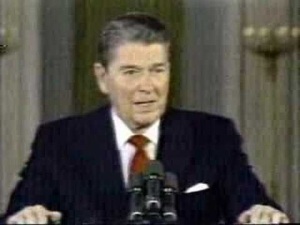 I just want to point out that I actually have a lot of respect for President Reagan, even though I’m a Jack Kennedy Liberal Democrat, but I also have serious differences with him and his fiscal policy which at the time would be called supply side economics. You cut taxes deeply without paying for them and increase government spending substantially in defense, but in other areas as well. The theory being that the economic growth as a result of the tax cuts, would pay for the new spending. President Reagan inherited roughly a 40B$ Budget Deficit which even at the time in the late 70s and early 80s was considered small.

And President Carter had an awful economy and President Reagan inherited and awful economy, but left office with a strong economy. With strong economic and job growth, but left office in 1989 with a large Federal debt and deficit and one of the largest debts as a percentage of GDP. As well as deficits of GDP as well, of around 200B$. President Reagan’s debt and deficit was so big that he raised taxes in back to back years after the 1981 tax cuts and this is with a Republican Senate as well. President Reagan’s own Vice President called the Reagan tax cuts when he was running for President, “Voodoo Economics”.

Howard Baker, a Republican and the Senate Leader from 1981-85, called the Reagan tax cuts “a riverboat gamble”. David Stockman, President Reagan’s own Director of Budget and Management called the Reagan tax cuts a big mistake. Dick Darman, President Reagan’s other Director of Budget, said that if President Reagan had to choose between balancing the budget by 1984, or ending the Cold War and getting the economy going again, he would pass on a balanced budget. He didn’t want the debt and deficit, but believed that was a price worth paying in oder to accomplish his other goals. You know none of these people are Democrats, they are all Conservative Republicans saying these things. Just not Neoconservatives.

President Reagan never submitted a balanced budget to Congress, or a plan to balanced the budget to Congress. It was never a priority on his part. The economy, the Cold War, reforming Social Security, tax reform and immigration reform were his priorities. All things that he got through Congress as President. He had a very good batting average as President. Including his ten plus tax hikes he had as President, including middle class tax hikes with the 1983 Social Security reform law. President Reagan increased taxes and spending and because of that he could be labeled a tax and spender.

A label that’s generally reserved for Social or Progressive Democrats, not Conservative Republicans like Ron Reagan. Ron Reagan talked and campaigned like a Conservative, but governed like a pragmatist. “This is what I want to do and if I have to give these things up to accomplish that, then that’s a price I’m willing to pay.” President Reagan was right to cut taxes, perhaps even as deeply as he did. 70% tax rates in a liberal democracy is too high. But where he failed was by not cutting government spending to make up any difference that economic growth doesn’t pay for. He was also correct to beef up our national defense, but failed to pay for it as well. And that’s why he left office with the debt and deficit he had.