The Politics of Writing: ‘The Failures of Masculinity’: Do Radical Feminists, Really Hate Straight Men? 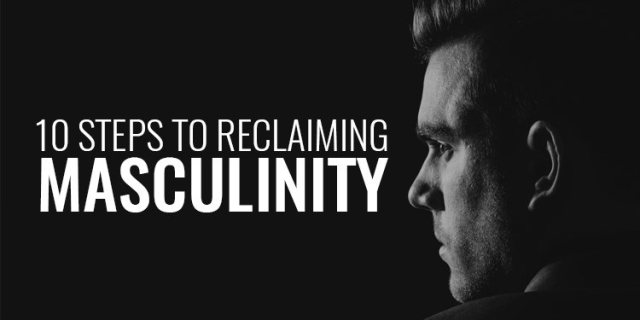 “There are few things in society that can be perpetuated that are so plainly false yet never have their merits questioned. The concept of masculinity is one of these things. It can take many forms, not just as a mindset but also through actions in our daily lives. Masculinity is believing that men need big muscles, hair on their chest, never to show emotions – and especially – never to cry. It is a repressive force that keeps men at a standstill, keeps women in a nuclear home holding cell, and adds absurd amounts of anger to the world we live in. First, once we fully understand the roots and causes of masculinity it will be easier to tear it down and place a functional belief set in its place.”

Read the rest at The Politics of Writing

“The Canadian psychologist Jordan B Peterson says there is a “backlash” against masculinity and “a sense there is something toxic about masculinity”.
He told Hardtalk’s Stephen Sackur: “There are biological differences between men and women that express themselves in temperament and in occupational choice and that any attempt to enforce equality of outcomes is unwarranted and ill advised as a consequence.”
Mr Peterson is a professor of psychology at the University of Toronto and author of 12 Rules for Life: An Antidote for Chaos.”

Reading this piece from The Politics of Writing, I get the sense that if Socialists were ever in charge in America ( especially Radical Feminists or Marxist-Feminists ) straight men and male heterosexuality, would essentially be outlawed. That America would be nothing but straight women, dykes, ( butch lesbians ) and openly gay men. ( Or queens ) That it essentially would be illegal to be a straight man. It would be illegal for men to be butch or masculine, we would be forced to give up our deep voices and everything else that makes us straight and masculine.

And it wouldn’t just be the way that straight men present themselves in public that could become illegal ( if Marxist-Feminists ever came to power in America ) everything that we’re into as guys would be gone, or at least outlawed. Football, boxing, pro wrestling, ultimate fighter, poker nights, auto racing, car shows, sports bars, action movies, even checking out women in public without first getting their permission to check them out would be considered illegal. But of course ice skating, ice dancing, tennis, and soccer ( the official sport of socialism ) would remain legal in America. That it would essentially be illegal for American men to be guys if Socialists and Marxists-Feminists ever came to power in America.

I also get the sense at The Politics of Writing that author of that piece believes that it’s not just straight men that are the problem, but what he calls white straight men that are the problem and represent everything that’s wrong not just with America, but with the world as well. That they’re the cause of all the violence and bigotry in the world, including sexism.

I don’t doubt that there are sexist, bigoted, even violent men in this group of men that he calls straight white men, but to claim that there the only reasons for these problems in society, you would have to forget not just about a lot of other men in America, but around the world as well. And women as well who commit violent crimes and even become terrorists of all races and ethnicities.

If you think all violent men in America or in any other country are purely of European ancestry, to quote the heavy metal band Judas Priest: “you have another thing coming.” Have you’ve ever been to, read about, watched and news piece about the Middle East, Africa, Central America? You seriously don’t believe that those countries don’t have their own share of violence and bigotry, that comes from straight, masculine men?

In a lot of African, Middle Eastern, and South Asian countries, homosexuality is still illegal under law and punishable by death. But we don’t hear about what Radical Feminists call excessive masculinity and male straightness coming from those places, because the men in those countries aren’t European or Protestant. It’s just flat-out racism that comes from people who claim to be anti-fascists and anti-racists.

If you want to talk about violent men or violence and bigotry coming from anyone, then cover all of your bases. Or at the very least don’t deny or ignore the evidence and facts that contradicts your partisan ( if not racist ) argument that all the violence in the world just comes from straight European-American-Protestant men. That’s assuming that you want to be taken seriously by anyone who isn’t already a member of your partisan clan. Radical Feminists or Marxist-Feminists are radicals for one very good reason: they’re not very popular. Similar to how people on the Far-Right who are called White-Nationalists, aren’t popular, which is why they’re radical. They’re both out of the mainstream in most societies.

2 Responses to The Politics of Writing: ‘The Failures of Masculinity’: Do Radical Feminists, Really Hate Straight Men?