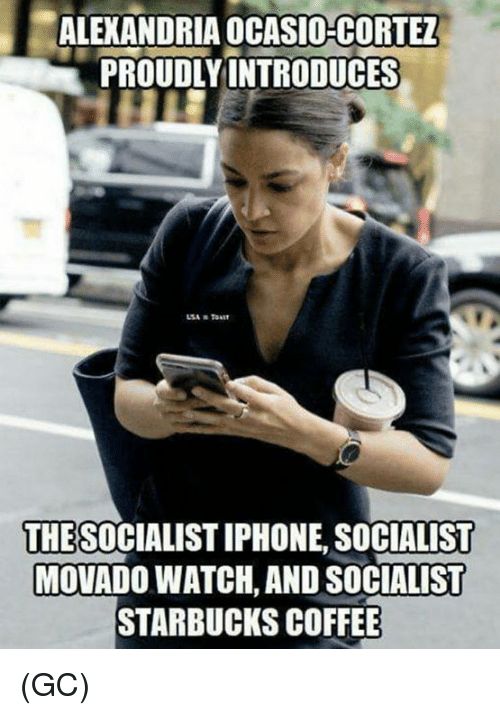 If Congresswoman Alexandria Ocasio-Cortez didn’t exist, I might have to invent her since she helps to make socialism such an easy target for mockery.

Though I actually admire the fact that she doesn’t try to disguise her agenda. Like “Crazy Bernie,” she openly and boldly pushes for an ideological agenda that would put the United States somewhere between Greece and Venezuela in the global rankings for economic liberty.

And while that would be a horrible outcome, it does generate the satire for today’s column.”

“A conservative columnist reported a ‘terrifying’ experience at an event featuring Alexandria Ocasio-Cortez, in which horrifying subjects like healthcare and education for children were discussed. Scary!”

From The Late Show With Stephen Colbert

I guess I have mixed feelings about Freshman Representative ( or is Freshman now considered to be sexist ) Alexandria O. Cortez from New York City and I guess most of them are negative: but if there are any positive reasons about the start to her career in the House of Representatives and political career in general, is that she’s a great reminder that the Far-Left of the Democratic Party is still the Far-Left: another way of saying not ready for prime-time. It’s not that AOC and company aren’t running the Democratic Party yet, or they’re not running the House Democratic Caucus, it’s that they’re not even ready to run these institutions yet.

Before I get into her socialist politics and economic views, let’s just start with Congress first, especially in the House where Representative Cortez and other Freshman House Democrats back up my point on this: it’s one thing to be a Freshman Representative from gee I don’t know, New York City ( just to pick a city ) where maybe 7-10 New Yorkers believed that President Donald should’ve been impeached on day one after Democrats officially took control of the House: it’s easy to do that when you have no political power other than your vote and voice.

A little different when you’re not just in charge of the House Democratic Caucus which is what Nancy Polosi was doing up until 6 months ago, but now you’re running the entire institution other than the minority party and you have members in your caucus that don’t represent New York or anywhere else in the Northeast, or anywhere on the West Coast, but represent Midwestern districts where President Trump isn’t considered the devil there and maybe they don’t like him, but they know he’s up for reelection in 2020 and they kind of think what’s the point of impeaching the President, when not a single House Republican will vote for it and perhaps not even a single Senate Republican will vote for conviction, when you would need to hold all 47 Senate Democrats and pick up 20 Senate Republicans for conviction. And they also know that you might lose 5 or more Senate Democrats, if the House impeaches.

Monday morning and sideline quarterbacking is one of the oldest games in Washington: easy to say this is what I would do if I were in charge. Another to not just make a real decision knowing what the consequences of that decision might be and then trying to live with them. Alexandria O. Cortez, might be the like totally awesome, OMG rock star in politics ( at least with Hollywood and on the Far-Left ) of whatever they’re calling her, but being the coolest girl or person in the room doesn’t give you political power. You can win elections that way at least at the House level and below that. But as Beto O’Rourke and his presidential campaign is finding out, you need more than that to be successful in politics other than: “vote for me, because I look like a Hollywood actor and I I got a cool speaking voice, talk with my hands a lot, relate well with pop culture, connect with people in coffee houses and trendy bars, etc.”

As far as Representative Cortez’s politics, especially her socialist economics: for someone who says that American capitalism is bad, perhaps even racist, and everything else that she claims to not like about it, she lives very well with it. And it’s not just her, but you can make this criticism about anyone else in her generation who claims to not like American capitalism: I mean which government agency or state-run company produces all of her designer suits, or Starbucks coffee, her I-phone, the car she drives , etc. I mean hearing her or anyone else from her generation or anyone else who says there a Socialist too, is like listening to a so-called animal rights activist talking about the cruelty of eating meat, while they’re wearing a leather jacket: why would anyone who is of sound mind and intelligence take that person seriously. And the same thing with the so-called environmental activist who drives around in an SUV talking about the need to get off of oil and gas, because they’re bad for the environment.

I mean it’s easy to say you’re a Socialist in some Hollywood movie or perhaps in Hollywood in general, because probably no one is going to take you seriously anyway. Similar to Manhattan, Hollywood is the most capitalist and liberal democratic ( liberal democratic in the classic sense, at least ) places in America. Perhaps the last two places in America that would ever want America to become some type of a socialist state, simply because they would no longer want to work and live here and pay the taxes. But it’s another to now hold public office, because now you’ll be held accountable for everything that you say, propose, all your votes, committee appearances. And I believe at least that you have some responsibility to not only live up to your rhetoric, but to live by it as well. You really believe that American capitalism sucks so much, then try living without it.