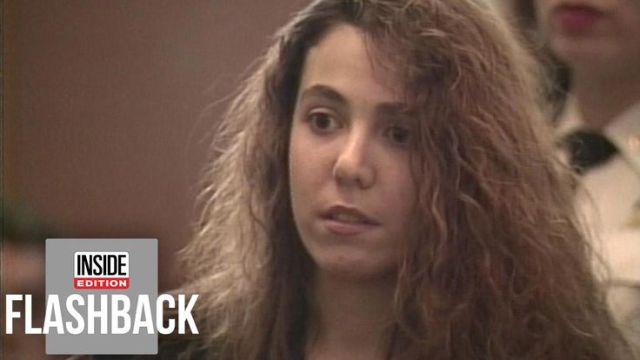 Source:Inside Edition– Amy Fisher: about to be sentenced for shooting Mary Jo Buttafuoco in 1992.

“On May 19, 1992, 17-year-old Amy Fisher went to her married lover’s home, rang the doorbell and shot his wife in the head. The story became a tabloid news sensation, with Fisher dubbed “Long Island Lolita.” Her victim, Mary Jo Buttafuoco, survived her injuries but will always have the bullet lodged in her skull. In December 1992, a judge sentenced Fisher to five to 15 years in prison. At the sentencing, Mary Jo detailed the pain Fisher had caused her family. Fisher was released in 1999.”

Happy Friday and because of that we’re going to take a different course today and take a short break from the current affairs and history that this blog normally covers and instead talk about more important and pressing issues like tabloid true crime stories. LOL Or at least more entertaining stories like the Long Island love affair between Joey Buttafuoco and Amy Fisher from back in the early 1990s.

To answer Inside Edition’s ( speaking of tabloids ) question about why Amy Fisher shot her ex-lover’s Joey Buttafuoco wife Mary Jo: she was sort of a crazy, highly impressionable, lost in space teenage girl who wasn’t even 18 yet when she shot Mrs. Buttafuoco, who believed that Joey even though he was married with kids and was happily married with kids and loved his kids, and was a successful small business owner in Long Island, New York, that he would give up all of that to be with her. Amy Fisher, who was still in high school when she met Joey and Joey was 36 at this point with everything else going for him in life that I already mentioned.

I’m not not a mindreader, ( obviously ) otherwise life would be way too interesting for me always knowing what others are thinking, but I was a teenager at one point even if my grasp of reality was a lot stronger than Amy Fisher’s, but I have to imagine that Amy with her teenage and obsessed mind probably assumed that if Joey wouldn’t leave his wife voluntarily, that maybe if she eliminated Mary Jo herself, then maybe Joey would take her back and they could be together again. And maybe she becomes the mother of his kids.

Amy sort of had this Marilyn Monroe delusion going on where she expected a man that she believed was in love with her would give up everything that he already has: beautiful wife, the kids, nice home, successful business, money, in order to be with her who wasn’t even out of high school yet. But that’s just my theory about this case.