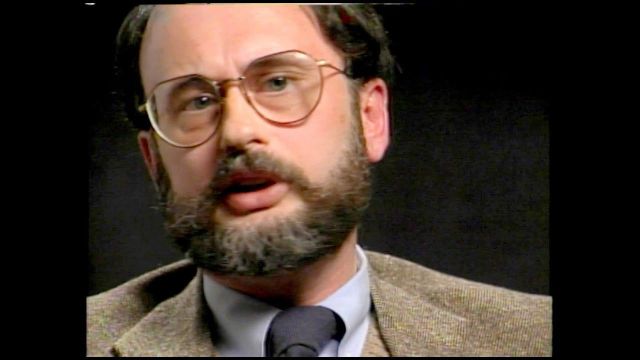 Source:David Hoffman– Unknown man, but looks like Robert Kuttner from The American Prospect: who would never be confused with any actual Conservative.

“This is another clip from interviews that I conducted for my PBS television series, Making Sense Of The Sixties. It was recorded in 1989. The speaker was a professor and writer.”

I think we need to careful about throwing out political labels when we get into the discussions in these debates and perhaps first figure out what we’re talking about here and then see if the label conservative or liberal fits here. Instead of labeling everyone on the Right as a Conservative. And everyone on the Left as a Liberal.

Because as the guy in the video said: “liberal today, doesn’t mean what it use to mean and even what it meant in the 1960s.” And the same thing with conservative, as the guy said: “a Conservative use to be about protecting the free market and being a cold warrior against communism.” And I would add to that not someone who believes that everyone should be the same and live the same lifestyle and even use big government to force a certain way of life onto everyone. That America is a republic and free society, not some theocracy or monarchy where everyone is supposed to be the same.

As far as the 1960s: like every day decade the 60s had its ups and downs. What I liked about it was the individualism and America finally saying goodbye to Ozzie and Harriet and Beaver Cleaver’s 1950s America ( thanks to the Baby Boom Generation ) and Americans were finally free to be Americans. Whether you’re on the Far-Right or Far-Left in America, or somewhere in between just about every American wants the freedom to be themselves and to make their own decisions in life. Instead of Big Government or some national cultural authority telling us what it means to be a real American and Patriot and what it means to be moral. That instead our morality should be judged by how we treat each other. Not about how we live our own personal lives and personal decisions that we make.

Being an American to me as a Liberal, is about being an individual and respecting not just my own freedom, but the freedom of every other American just as long as we’re not hurting innocent people. Instead of judging people’s morality and patriotism based on how often they go to church. Or whether they had sex before they got married. Did they live with their partner before they got married and did they even have kids before they got married. Do they gamble, drink alcohol, smoke, that sort of thing. And instead we should judge people’s morality and patriotism by how we treat each other. Not just the people we say we like and love, but how we treat people in general and we do respect their rights and freedom as mush as our own, or not.

And for me at least the positive aspect of the 1960s along with the civil rights movement, women’s rights, and gay rights the new individualism that came about for all Americans regardless of race, ethnicity, gender, sexuality, or religion was what was great about that decade. Along with music and movies that came out during that decade. What wasn’t good about that decade and the negative aspects of the 1960s was all the violence including the War in Vietnam, but all the violence and what at times at least looked like anarchy in this country with big, great cities like Detroit, Chicago, Washington, Los Angeles all blowing up because of rioting.

Some have argued that there were justifiable reasons for all the violence in that decade because of high poverty, crime, and racism: but people who argue that should understand that all of that anarchy from that decade is how Richard Nixon becomes President in 1969 and how we get Watergate just a few years after that. And my question for them would be was all the violence from the 60s worth having President Richard Nixon, and escalation of the Vietnam War, and Watergate?

So what was great about the 60s was all the freedom and individualism of that decade where social movements that looked radical just 5-10 years earlier and even Un-American with people on the right-wing believing that these movements were started by Communists and other radicals, now becoming mainstream in America just 5-10 years later: the civil rights movement, antiwar movement, the music and movies, the hippie movement from that decade. With all the violence from that decade being the broccoli for dessert and giving the country a real sour taste in their mouths.