Bloodletters and Badmen: Virginia Hill- Mistress To The Mob 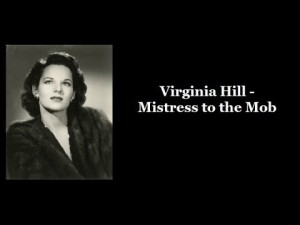 If you watch the movie Bugsy you see Virginia Hill as not just a mobster mistress but she basically handled the finances of Ben Siegel’s Las Vegas operation and business. Siegel had the vision that Las Vegas would become a gambling and entertainment mecca that it is now today and has been since the 1960s if not farther back. But in the 1940s when Siegel got this vision Las Vegas was basically a pitstop four hours east of Los Angeles. Where people would go to gas up, get a bite to eat, perhaps stay for the night, but generally not a place where people would go to vacation. Unlike what it is now which is one of the top vacation towns in America.

Virginia Hill was not a babe in the woods. She knew who Ben Siegel was and that he was married with kids and that he was a New York mobster before they got involved out in Los Angeles. And didn’t have any major issues with that. She was attracted to him physically, but his charm, his humor, and perhaps the most of all his power and wanted to be with him. And became his business partner and had a role in helping his build his Las Vegas casino which was the Flamingo.

Bloodletters and Badmen: Virginia Hill- Mistress To The Mob