Posted on February 6, 2018 by Derik Schneider 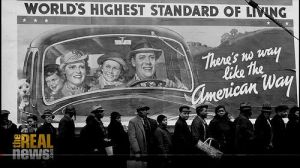 Vice President Henry Wallace, was President Franklin Roosevelt’s Vice President from 1941-45. This was the term that President Roosevelt moved left on economic policy while still being a strong anti-Communist and anti-Fascist liberal internationalist on foreign policy. But on economic policy FDR moved left and moved past the New Deal that he got through Congress in the 1930s and instead of talking about the need for a public safety net for people when they needed it, instead started talking about what’s called welfare rights.

FDR’s Four Freedoms agenda was about guaranteeing that every American would have exactly what they need to live well in life and that these human services would be provided by the Federal Government. The Henry Wallace social democratic side of FDR comes out in the 1940s and FDR again came out in favor of moving past the safety net and instead creating a welfare that that is common in Britain and Scandinavia. Where the national government would become responsible for seeing that every America had a good education, a good home, enough food to eat, health care, health insurance, a good pension, and I could probably go on from here, but I’ll spare you.

Henry Wallace was the Bernie Sanders of the 1940s ideologically. A true Democratic Socialist who thought that the American capitalist private enterprise system, left too many people behind with few people who were rich financially, a lot of people in poverty, and a lot of people struggling just to pay their bills. The Great Depression of the 1930s did a lot to change how Americans looked at politics and economics.

Pre-Great Depression America was basically a libertarian utopia economically. With every little if any government involvement in the economy. But when you start to see 1/2 Americans living in poverty with food lines and food banks in every major city in the country and 1/5 Americans who are unemployed, most of the major banks failing in the country, you might start to reexamine your own politics and look at economics as well.

It is after the 1944 presidential election where Henry Wallace is no longer Vice President of the United States and becomes independent of the Roosevelt Administration politically with the ability to speak for himself and express his own politics politically and look at running for President himself in 1948. In 1948 Wallace runs for President himself and wins the Progressive Party nomination which was really a social democratic or democratic socialist party and runs for President against Progressive Democrat President Harry Truman, Republican Tom Dewey and Dixiecrat Strom Thurmond. And America has a major Democratic Socialist presidential candidate to consider voting for. 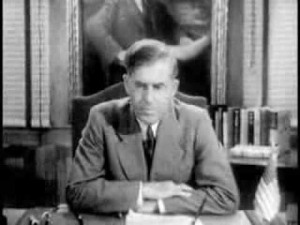