Politics and Prose: David Cay Johnston- ‘It’s Even Worse Than You Think’

Posted on February 2, 2018 by Kire Schneider 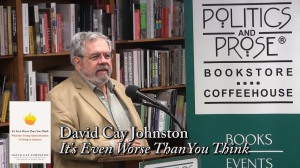 I agree with David C. Johnston that Donald Trump is not the disease in American politics, but a symptom. His presidency is an example of what can happen when Americans are literally so pissed off about American politics, American politicians, the lobbyists that they actually represent instead of the everyday American voters who work very hard for their living and proud of that.

Not just Independents but Democrats voted for Donald Trump. Far-Left-Wing Democrats and third-party voters who voted for Socialist Senator Bernie Sanders in the Democratic primaries for President, voted for Nationalist Republican Donald Trump for President. Who came out in favor of banning Muslims from entering America and a huge border wall that is supposed to be about two-thousand miles along and cover the entire American-Mexican border, even though no one actually believes that is even possible to accomplish let alone will ever happen, except for Donald Trump’s Far-right Breitbart Fox News voters. Even Donald Trump knows enough about immigration to know his wall won’t ever happen, but he’s also smart enough to know that his base doesn’t know that.

Think about that for a second. Socialists voting for a right-wing Nationalist for President, even though they had Green Party Socialist candidate Jill Stein, as an option to vote for President. Donald Trump for all of his weaknesses and lack of knowledge about everything other than how to make money for himself and entertainment, understands the American political system very well. Not the governmental system where he’s not even a student of American government at this point, but instead barely knows it exist and sees the U.S. Justice Department and White House Legal Counsel Office, as his personal law firms that are supposed to be in the business to only represent him.

But Trump is smart enough about American politics to know where American voters are at least on the right-wing side of it and not the Center-Right of the Republican Party, but the hardcore Right if not Far-Right. And he knows what he can do and has to do to get those voters to vote for him and support him. He also knows that there is this so-called Reagan Democrat wing in the Democratic Party who generally vote for Democrats for President and who voted overwhelmingly for Barack Obama for President twice, but that these voters haven’t been part of the economic recovery that we’ve been living though since 2009. And hate our American political system and the politicians that get elected for obvious reasons. And that Donald Trump completely represents the anti-political as well as government establishment in America.

All Donald Trump did in 2015-16 was to be smart enough to understand these things and be smart enough to take advantage of them. You want to get the Donald Trump’s of the world out of the American political system and more importantly out of the American government, you need better government and better people working in government especially at the top. And even more importantly you need better and smarter voters who vote for good people to represent them. Even if they tell them things and take positions that they don’t want to see and here from time to time.

Politics and Prose: David Cay Johnston- ‘It’s Even Worst Than You Think’