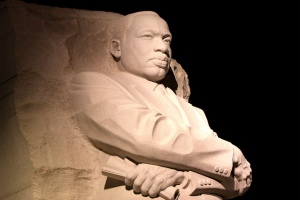 By the time 1967 comes alone Dr. King was a down the line anti-war and violence all together pacifist Democratic Socialist. Even to the left of Democratic Socialist Senator Bernie Sanders today who isn’t a pacifist and have supported American military action plenty of times during his career in Congress. Dr. King was as Far-Left and idealistic as Dr. Jill Stein ( the Green Party Leader ) today. He wanted a Federal Government big enough and to tax enough to meet the means of the American people. Which was mainstream socialist thinking back then and certainly today as well.

Which is why I see Bernie Sanders as the Martin King of his era. Someone who his not just a Socialist, not just a proud Socialist, but a proud self-described Socialist in the democratic sense. Unlike a lot of Socialists in America today who love the politics of socialism without living with the label of Socialist. And prefer to be called Progressive or even Liberal instead. When the fact is they’re Socialists and in many cases illiberal when it comes to free speech, property rights, and not seeming to put any limits on what government should try to do for the people.

After the civil rights laws are passed in the mid and late 1960s, Dr. King and his movement moves past civil rights and into welfare rights. And he gives a lot of speeches against the Vietnam War and instead calling for those resources to meet the needs of the American people, poor people especially. The radical Socialist Dr. King comes out for America to see in an era where young Americans especially were speaking out against the establishment and even the American form of government and were looking for a more radical way to govern America and a more radical political system for the country.