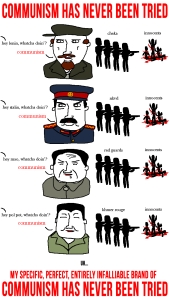 Communism- where do I start and how to talk about this? How about what I hate about it and why it simply doesn’t work at least in the sense that it makes things better for society than that country was before. I guess you could start with the pure over centralization of it. This idea that if you give one government authority the power over everyone else in the country even in a huge country like China or Russia, or a midsize country like North Korea, or a small country like Cuba, even to serve the people that Communists claim they want to serve, that everything will better for everyone else. We have a 100 years of experience now to show that simply doesn’t work.

People can point to the People’s Republic of China all they want, but the Chinese economy didn’t take off until they brought in capitalism or what they call state capitalism and gave their people freedom to manage their own economic affairs and decide for themselves where to work, where to live, and to even be able to start their own companies or buy former state-owned companies in China. And yes, China is still a communist state at it relates to the lack of personal and political freedom there, or that they don’t have any private media and information in that country. But Marxist economics clearly failed in China. Pre-1980 China was a gigantic North Korea as far as their economy. One of the poorest countries in the world.

If you can stomach the lack of economic and personal freedom that results in a communist state, like you just ate three meals a days in jail or prison for a month straight and somehow managed to hold all of that garbage down (I hope your’e not eating right now) how about we get to how insulting of a political philosophy it is. According to Communists Karl Marx is God or their cult leader and everyone else are a bunch of morons who can barely spell their names and struggle just to tie their shoes or take two steps forward without tripping over their own feet. Communists believe the world is simply too complicated for the average person which is most of the people in any country regardless of the size and wealth of the country. And you need Big Government to make everyone’s personal and economic decisions for them.

With any other generation other than the Millennial Generation, I might be saying something like, “for the life of me, I don’t understand why Millennial’s seem to respect if not like Communists and communism and perhaps Socialists and socialism in general.” Especially if I was in a Jimmy Stewart dog gone it what’s going on with young people kind of mood. But we’re talking about a generation that doesn’t even respect history, let alone is knowledgable about it and believes that Hollywood wasn’t created until 2000. And perhaps has never even heard of the Soviet Union. And looks at everything that happened before they were born as, “so old school” and therefor not worth their time learning about.

We’re also talking about a generation that values pop culture and one’s style and attitude, over their substance and what they bring to the table as far as knowledge and professional qualifications. So they look up to people like Che Guevara, Fidel Castro, Socialists from the 1960s and 70s like Tom Hayden and many others, that were part of the New-Left movement then, because they were antiestablishment. Who smoked cigars, wore long hair, including beards, wore berets, and talked in this language that makes them sound like they’re high or something. So these people are considered cool or awesome to them, even if they’re responsible for murdering people even in the name of some violent revolution to take down what they see as a corrupt and racist system.

But for every American who grew up at least in some point during the Cold War and remembers hearing about the Soviet Union and Russians leaders like Mikhail Gorbachev and remember hearing about these things and people as kids, who were born before lets say 1980, Americans who weren’t part of the 1960s New-Left socialist movement know how bad communism is. And the horrible consequences that have come from this overly statist collectivist philosophy. That always puts the concerns of the regime and the ideas of Karl Marx, over what’s good for the people and the people themselves. That treats people like they’re mental patients or mentally retarded and living in institutions, because they’re not competent enough to make thee most basic of decisions for themselves.