Posted on September 15, 2013 by Ederik Schneider 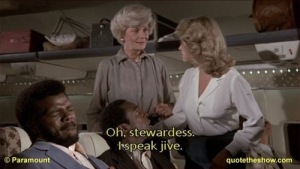 “CLIP DESCRIPTION:
When a flight attendant struggles to understand her jive-talking passengers, a friendly old lady (Barbara Billingsley) steps in.”

Just to sort of be serious for a minute and then I’ll go back to being an asshole. I’m just glad this movie and scene was made in 1979-80 instead of lets say thirty-years later. Why? Because it wouldn’t of gotten made in today’s political correctness universe and Hollywood. Could you imagine how MSNBC, Salon, The Nation, AlterNet and others would react to a Hollywood movie making fun of Jive and what is today called Ebonics. All of the charges of racism that would come as a result with perhaps hundred of thousand or so far-left wing protesters protesting against Hollywood studios.

But of course it is perfectly okay with the so-called leftist political correctness community to make fun of rednecks and rural Americans in general, just as long as they are not Anglo or Caucasian or both and female. Because according to the Far-Left in America that is where all the ignorant people in America live and that is what all of them look like. Just tells you how ignorant the Far-Left is in America. I think only Bill Maher and his supporters on the Left, lets say the true Liberals would for one find this scene funny today on the Left. And defend the people who created it.

Now far as the scene goes, it is classic Airplane and how this movie represented the times, the late 1970s and that decade in general and what America was like as far as the whole movie in general and what the country was going through. They just did in better satiric form then perhaps anyone else back then. A couple of African-American men flying on the same plane together and apparently they only speak what was called then Jive. Perhaps they’ve only spent five-minutes outside of the ghetto their whole lives and this is the only way they know how to talk.

So what does Airplane do, but have an older wealthy Anglo-Saxon women played by Barbara Billingsley, who was in her mid-60s at this point as the only person on the plane besides these two men who can speak and understand Jive. This is classic Airplane and why they were so ahead of their times as far as talking about the times and putting it an entertaining way that everyone can understand and not take offense at.