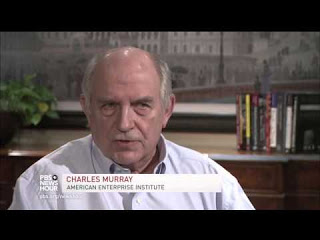 “Economic anxiety has taken center stage in this year’s election, driving many angry voters to rally behind Donald Trump. According to conservative Charles Murray, this anxiety can be traced back to deep-seated feelings of marginalization among working class families, exacerbated by the perceived disconnect between themselves and the political elite. Economics correspondent Paul Solman reports.”

From the PBS NewsHour

The American middle class and you could go down half of a class and look at the working class in America who tend to be blue-collar and perhaps just have a high school diploma and perhaps some college and are people who probably make somewhere around 30-60 thousand-dollars a year and would be the lower middle class in America as far as income. These people have seen an economic decline in America who think the rich have been screwing them and sending their jobs oversees. And the poor get to live off of taxpayers for free.

So they’ve seen the rich get richer and the poor getting more free taxpayer funded benefits. And they’re thinking how about them and whose going to look out for them and empower them to do better in America. And here comes this rich guy someone who is perhaps even a billionaire in Donald Trump saying he’s their champion and fighter. Talks about bad trade deals and tells them immigration is costing them their good jobs. Someone who labels Mexicans as rapists and criminals and Muslims as supporters of terrorism.

As I said in my piece Sunday about Donald Trump, Trump voters 30-40 years ago would have been called Reagan Democrats and are now Trump Republicans. Southern and Midwestern blue-collar Republicans who tend to Anglo-Saxon and Protestant and have other European backgrounds and are also male. The so-called angry white-males that voted heavily against Bill Clinton and other Democrats in the 1990s. Donald Trump has as much in common with working class voters as the Christian-Right has in common with Communists.

But one thing that the The Donald has been successful and good at in his career has been as a salesman. The man could sell water to fish if given the opportunity and I and many other people would say he’s a great con-man in the amount of success he’s had at coming on fifty-years in business.

And The Donald loves power and what’s more powerful than the President of the United States. And decides he’ll try to convince millions of Caucasian working class voters in America who perhaps have never heard of Donald Trump before he ran for president that he’s one of them. And so far he’s had great success with this voting block.