“George McGovern has died. To License This Clip, Click Here:CNN.” 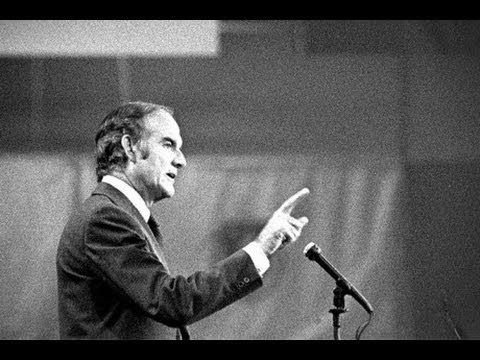 Just to talk about Cenk Uygur’s point about Senator George McGovern speech on the Senate floor in 1972 about the Vietnam War and then I’ll get into the anti-war movement back then. I wouldn’t be surprised if the speech that Cenk was quoting from, was stricken from the Congressional Record. There reasons why Congress has certain rules of decency and decorum and why members unless they are directly speaking to each other and sharing time on the floor, aren’t allowed to talk to each other directly and are now allowed to make their points personal. The House and Senate, are partisan enough just from the members that they have and how each party disagrees with each other on so many issues. You allow both chamber’s to attack each other personally and accuse each other personally and personally question motives of other members and the institution would fall apart.

There’s a very good reason why the Democratic Party hasn’t nominated anyone as far to the Left as George McGovern since for President. 1972, Senator McGovern, wins one state, Massachusetts. Perhaps the most socialist state in the union, at least back then. Perhaps even more socialist than Vermont, the so-called Socialist Republic of Vermont. Vermont, voted for President Richard Nixon. Senator McGovern, failed to break forty-percent of even the popular vote in 1972. That is what happens when you run as Far-Left as you possibly can see what happens. You end up representing a fringe population of the country. While you lose members of your own party as well. You don’t break forty-percent of the popular vote, you’re losing 1-5 of your own party.

George McGovern’s, record in the Democratic Party and in Congress, I believe is a mostly positive one. By changing the rules in the party, the primary system and how delegates to the convention are counted and appointed, he brought in a lot more voters to the Democratic Party. Which didn’t do him much good in 72, but I think he knew he was going to lose anyway and perhaps the country wasn’t ready for a, lets say Socialist-Liberal as their President. But all of those new Latino, African-American, Asian, Jewish and other voters, to the party, it benefited Jimmy Carter in 1976, Bill Clinton in 1992 and 96, Barack Obama in 2008 and 2012. Which made the Democratic Party no longer dependent on the rural South, to win elections.