Prager U: Adam Carolla- Who Not to Vote For 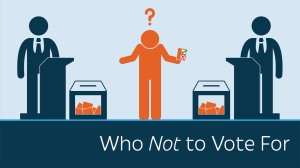 I agree with Adam Carolla’s point about the politician who says they’ll fight for you, but I think there’s a bigger problem in American politics. Actually its like a huge fast food combo of a problem. Imagine like a 40 ounce soda, a triple cheese burger and enough fries to feed three kids. But its only for one person and it cost around six bucks. Well if you eat this for lunch on a regular basis and you can eat like this at a lot of fast food joints in America, you’ll have a huge problem down the line in expanding body mass.

Well that is how big my fast food combo problem is when it comes to American politics. Politicians and candidates and who over promise, combined with dumb gullible voters who are dumb and gullible enough to take those political promises at face value. Who if we required citizens to get licensed in order to vote would fail every time the test came up, simply for not doing their homework as American voters. So don’t vote for people without first doing your homework on them. Listen to their soundbites, go to their rallies, listen to their commercials and interviews on TV. All that stuff is good and a way to become and informed voter. But means nothing if you don’t bother to your homework on them. And check to see if their current rhetoric and positions matches their past record.

The other politicians and candidates who you shouldn’t vote for are people who’ll say they’ll give you free stuff. Unless they’re very rich and know where you live, they’ll won’t be able to give you free anything. If you’re currently paying taxes including payroll taxes. So no such thing as free stuff from government for taxpayers. Even government has to get money from somewhere and sometimes oversees to pay for the public services that it provides. They don’t get their money by being great Wall Street investors or poker players. They don’t use Monopoly money or grow money on their trees in our public parks. They get their money from charging their taxpayers. And what we’re supposed to get in return are public services that they promised us. Including for the people who don’t want them.

Not all politicians are crooks and not all politicians are liars. And some of our politicians are neither, which seems to be shrinking minority today. The politicians and candidates that you should vote for are the people who know what the situation of the country and your community is. Have a realistic solution to solve them based on real evidence, experience and pragmatic policies. Shown they already know how to govern, because of course governing is about choosing and even working with people from the other party from time to time. (A good lesson for the Tea Party) And who doesn’t promise to do this or that, especially promises that just seem impossible for them to accomplish in their first or next term. And who don’t say they’ll give you free stuff. But instead lays out how much their programs are going to cost and then has a realistic and responsible plan to pay for them.