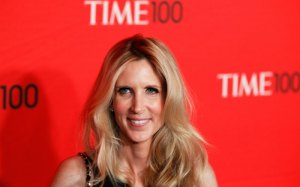 I don’t know who is a bigger birthday gift for bloggers and comedians, Donald Trump, or Ann Coulter. I guess The Donald would be at least physically, but that might only be because Ann Coulter has the body that only a stick-figure could want and is tall as a giraffe at the same time. Maybe they could run on a ticket for birthday gift of the year and run as a duo. Perhaps arm-wrestle to see who should run for president and who should run for vice president. I gotta admit even with her scrawny frame, with all of that masculinity that Ann carries inside, that might be enough for her to beat the 220 pound or more Donald Trump in an arm-wrestling contest.

Or better yet, The Donald and Flat Ann, could run for President and Vice President of the United States together for the Fascist Party and bring that back. As they’re working to develop their national time machine to take America back to 1955 and celebrate like its 1955 on New Years Eve and Day. They could appoint Rick Santorum as their foreign policy adviser and Mike Huckabee as their social policy adviser. Donald Rumsfeld, (an even less impressive Donald) could be their national security adviser.

Because they both know they’re not going to get elected to anything anyway. The Donald. wants to sell himself for his current venture which is, ‘Who Wants Donald Trump For President?’ Which will be available at your nearest TV set, or movie theater by the spring of 2017. And Flat Ann wants to sell her latest book and columns which will be available at your nearest garbage cans sometime in 2016. With pieces of three-weeks old baloney stuck in each page. With even homeless people turning down as food and reading material at the same time.

The only time I’m surprised by anything that either Donald Trump or Ann Coulter says, is when they say something intelligent. And I gotta tell you I have a hell of a memory and I can’t remember the last time either one of them ever said anything that got me thinking, ‘hum, we agree on something. They have a point there and I wish I had thought of that.’ They are both sharp businesspeople even accidentally in the sense that they know how to sell themselves. Sell their business ventures and in Flat Ann’s case her writings. Trash to be accurate that she sells that gets thrown out, or made fun, or a combination of both.

No, Ann Coulter, is not a prostitute, because lifelong prison inmates who have a better chance of seeing snow in San Diego than getting out of prison, have turned her down and have chosen men instead. What I mean by that is they sell themselves as far as what they’re personally selling. With The Donald, its his personality and reality TV career. With Flat Ann, its her books and columns. That keeps garbagemen in business forever with all the trash she writes. I personally for the life of me can’t believe why any intelligent person could even take either of them seriously, let alone believe what they say could actually be true.