Posted on September 24, 2015 by Ederik Schneider 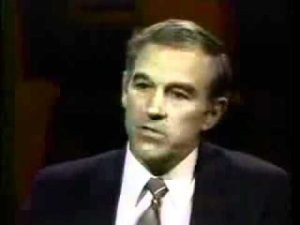 Ron Paul, sounding less radical even as a Libertarian than I was expecting from him in 1988. He was talking about eliminating the income tax, which is something I would like to do, but then replacing it with a national sales tax, which is also something I want to do. Which is a top for another post. And he was also talking about sending more money and power back down to the states. Not eliminating public education, but making private education available to students. Very radical for lets say a Progressive, or Social Democrat on the left whose never in favor of eliminating, or even lowering taxes and not in favor of reducing the power of the Federal Government at least as it relates to the economy. But for a Libertarian not very radical.

Generally when you hear libertarian political candidates speak they say they’re going to repeal at least two amendments from the Constitution, eliminate the income tax, the New Deal, Great Society, pull all Americans troops out of Europe and Japan on day one of getting into office. Even if they know enough about that government that doing even a few of those things are not very practical. Because of the opposition that would come from both Republicans and Democrats. But also the voters as well. But by the time Representative Paul ran for president in 1988 he was already in his sixth term in the House and had a pretty good idea about how Congress worked. So he wasn’t proposing to repeal a bunch of constitutional amendments and that sort of thing, because he knows how difficult that is.