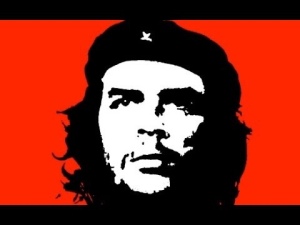 I believe this so-called movement towards Communists and communism from Hollywood and their fans, has to do with pop culture and faddism. Che Guevara, is considered cool with this community, especially with the Far-Left in Hollywood and outside of Hollywood. He was a revolutionary and every time you’re a revolutionary from the Left or Far-Left in this community, you’re automatically considered cool, or awesome. And people want to be seen as supporters of people like Che Guevara or Fidel Castro, because they want to be considered cool, or awesome as well.

And as far as Hollywood, if something is considered cool, or awesome and it doesn’t come from Hollywood and especially if it comes from the Far-Left, like lets say Communists, to use as examples, you’ll see actors and other entertainers jump on the bandwagon so fast, that the bandwagon will collapse. And people will have to walk to the latest rally supporting this cause, or that figure, or whatever it might be. The whole so-called political correctness movement, that today’s so-called Progressives support, is a perfect example of that. Where you’ll have a Ben Afflect, or someone else, jump to the defense and try to censor anything that is critical about who this community supports.

The so-called cool commies rave, or whatever, is exactly that. Che, is considered cool, because he was against individualism and private enterprise, was a revolutionary, he wore a thick hipster beard and perhaps went years without shaving, or even trimming his beard. Which is a common theme with Americans under 30 right now, especially on the Left. But there’s no real hard-core political support for communism and a lot of other New-Left movements in America. At least not coming from Hollywood. Which is as about as individualistic and capitalistic a community that we have in America. That is always looking for the next profit and would probably fight to the death to prevent America from becoming a Communist State.