Patricia Arquette: ‘It’s Time To Have Wage Equality Once And For All and Equal Right For Women’ 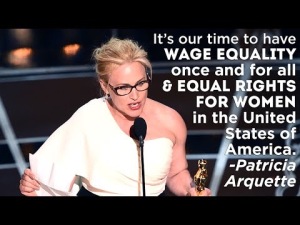 “Boyhood” supporting actress winner Patricia Arquette catapulted gender equality and the wage gap between men and women to the forefront of the media landscape while accepting her award at the Oscars on Sunday.

“To every woman who gave birth to every taxpayer and citizen of this nation, we have fought for everybody else’s equal rights,” Arquette said in her speech. “It’s our time to have wage equality once and for all and equal rights for women in the United States of America.”

Those remarks touched off a debate that advocacy groups hope will rally the public to their cause and will put pressure on legislators, particularly at the federal level, to pass laws designed to end income discrimination. They note that women on average make 78 cents for every dollar a man earns, and the gap widens with age and extends to nearly every industry.

Seems like every time there’s some big awards show, like the Academy Awards, or some other big celebrity culture event, one of the big celebrities there takes the time to weigh in on one of the big issues today. And because of the internet, social networking, blogging and how dominant celebrity culture is today, these events and speeches just get played up that much more today. So what actress Patricia Arquette did while receiving her 2015 Academy Award, is nothing new. Publicly coming out in favor of what is known as pay equity and closing what is called the gender pay gap.

I at least believe if you’re a true feminist, you believe in equality of opportunity for men and women. And what men and women do with those opportunities is up to them. But if you’re more of a Socialist, or a radical feminist, you somehow believe that men making more money than women is somehow unfair. Sexist even, even if the reasons why the men are making more money had nothing to do with gender. But what they do for a living, or how they prioritize their lives. How they raise their kids and the relationship that they have with their wives and the roles that they plays in their kids lives.

If the question is should men, or women make more money than their counterparts simply because of their gender. I believe the overwhelming majority of Americans would say definitely no. Some at least on the Far-Right, might say that the woman’s place is in the home raising her kids and taking care of the household and being obedient to their husbands. While some on the Far-Left, like radical feminists will say that women are superior than men. And should make more than men anyway just because they’re women.

1 Response to Patricia Arquette: ‘It’s Time To Have Wage Equality Once And For All and Equal Right For Women’