AlterNet: Opinion- Valerie Tarico: ‘I Am Pro-Abortion, Not Just Pro-Choice: The Difference Between Pro-Choice & Endorsement 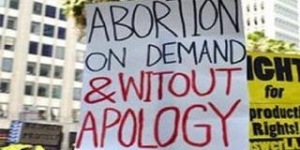 Reading this piece by Valerie Tarico, reminded me of a conversation that I was in about three years ago on Facebook ( of all places ) that was about abortion. And after I tell you about this conversation, you’ll know where my position is on abortion and choice when it comes to abortion. We were talking about abortion, obviously. But what made this discussion interesting was that we were both in favor of keeping and having abortion be legal. That the women should make the call when it comes to her own pregnancies.

But where we differ has to do with public financing of abortion. I’m against that, because I don’t believe taxpayers should be forced to finance someone else’s abortion. Especially if they view that as murder. Which I don’t, but only to save the life and health of the mother, or if she was raped. The person I was talking said that he supports public financing of abortion. But for fiscally conservative reasons. So taxpayers don’t have to support someone else’s kids that the parent or parents can’t support. He supports public funding of abortion to prevent low-income women from having additional babies while they’re still poor. I told this person that they sounded pro-abortion to me. And that I’m pro-choice, which is very different. The person said that they were pro-abortion.

As far as Valerie Tarico’s piece in the AlterNet. She compared abortion with knee surgery. She said she’s pro-abortion like she’s pro-knee surgery or supports chemotherapy or cataract surgery. Even though these procedures are completely different. ( To state the obvious ) And perhaps Valerie Tarico needs this stated. You don’t end pregnancies and future babies and children being born when you get a knee surgery, or get your eyes fixed. That’s what you do with an abortion. A woman ends her pregnancy and as a result she’ll never have a baby from that pregnancy as a result. Unless the woman was raped, she didn’t have to become pregnant in the first place. She chose for that to happen, along with the father together. And she can choose to end her pregnancy as well.

Pro-choice whatever the issue and freedom of choice just doesn’t cover abortion. So if you say you’re pro-choice on abortion and perhaps homosexuality, but you support big government and the state when it comes to marijuana and other drugs, perhaps even alcohol and tobacco and now sugar and salt, like with some paternalistic nanny statist so not so Progressives today and add gambling and pornography and certain types of speech as well, your belief in freedom of choice is very limited really to just one or two issues, while you would have a big government there to stop people from making all sorts of other personal choices that you disapprove of. Even if they aren’t hurting anyone with what they are doing.

See, that’s the beauty of liberalism, liberty, liberation, liberalization, freedom in general. ( Deal with it right-wingers ) The ability for individuals to make their own decisions even if they’re making a decision that is potentially harmful, especially if they don’t know what they’re doing and others don’t approve of. But then also have to deal with the consequences of their choices. Including the financing of them, so we can’t pass the cost of our own decisions on to others, especially if those decisions are bad. But also so we aren’t financially endorsing bad decision-making in this country. And that is the difference from being pro-choice on multiple issues and publicly endorsing the decision-making of others.
Live Action: Lila Rose & Ilyse Hogue- Debate Abortion on CNN Crossfire

1 Response to AlterNet: Opinion- Valerie Tarico: ‘I Am Pro-Abortion, Not Just Pro-Choice: The Difference Between Pro-Choice & Endorsement