I saw about twenty-minutes of Senator Tom Cotton’s first U.S. Senate floor speech. (Thank God for C-SPAN) And twenty-minutes was about all as I could take from the freshman Senator, who sounded like a freshman in his first ever Senate speech. You would think a military veteran who served in the Iraq War, would have a hell of a lot more intelligence and knowledge about American foreign policy and national security. But maybe that is a topic of a different debate. But his first speech was about American foreign policy and national security. Which is perfectly legitimate especially from a military veteran. But all he had I guess thanks to the Heritage Foundation, was neoconservative talking points. Which I’m about to get into.

I’ve argued before that the Neoconservative is not conservative. Conservatives move cautiously and shows a lot of restraint, especially fiscally. One of the big points about being conservative is that you move, you know conservatively. The Neoconservative is right-wing Utopian. With all sorts of grand utopian ideas about how how great the world would be if America just ran it. And tends to see money as no object that their grand world strategy is such a wonderful thing that you don’t even have to pay for it. Because if anything it will pay for itself. The Iraq War and the Afghanistan War are excellent examples of that. For the first time America decided not to pay for its war operations upfront. And we’ve paid for it ever since on our national debt card.

Senator John McCain, whose also a military veteran and a decorated one, is called and criticized by the Left, especially the Far-Left as a Neoconservative on foreign policy. And part of that is accurate as for as his belief in the use of force and military strength. But one of the reasons why he has so much bipartisan respect in Congress and on the outside is because he’s also one of the first members of Congress to point out military waste in the budget. Like when a senator or representative sticks in funding for a plane that can’t fly, that the military didn’t ask for, he’ll point that out and even name the member who put in that amendment on the Senate floor. That is why he can get away with a lot of his neo-con positions on the military, because he’s someone who knows what he’s talking about.

According to the Neoconservative, there’s no such thing as military waste. That every part of the military budget is sacrosanct. And even if there’s something not working properly with the military budget, it’s because its underfunded. I mean they almost sound like Social Democrats or Socialists even when it comes to how they prioritize the spending that they love. If a public school is not working well, or a social program is not performing well, the Socialist will automatically say, “it’s because its underfunded. That if we just spend more money on it and raise taxes that will fix the program.” The Neoconservative takes that same logic, but implies it to military spending instead of social welfare spending.

Just look at Senator Cotton’s speech and I suggest you watch the whole thing. That you could do either on C-SPAN’s website or go to the Senator’s website and you could watch it there. He goes through the military budget and how little we are spending here and there. And as a result we are now weaker when it comes to our national defense. Because back in the day we spent more money on this defense program or that one. According to Senator Cotton, instead of laying how capable we are here and there and what are military is physically capable of doing now. I’m sure a lot of Neoconservatives love him, Dick Cheney and others may encourage him to run for president in 2020. But that is not how you judge government budgets military or otherwise. You judge them based on capability and results. Not by how much you spend. 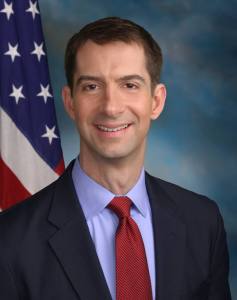