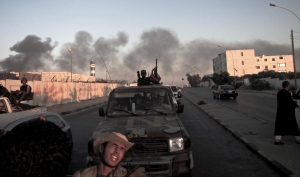 Here’s my definition of a failed state. A state that can’t defend itself even against domestic threats whether the government is a good peaceful responsible government, or an authoritarian regime with a bad human rights record. That would be Libya right now and you could make a case for Syria as well, because without Russia, the Assad Regime might have failed by now. A state where the current government is in trouble and about to fall, where members of the government or administration are looking to escape their own country because the rebels are about to take over. Iran comes to mind in 1978-79 as a failed stated under the Shah.

So what does this mean to America and how can America prevent future failed states and why should it if it should at all.

The last thing the civilized world needs are armed terrorist groups with their own territory and land about the size of a large country that wants to occupy further territory and even take over Western allies. So the West doesn’t want ISIS or someone else being able to occupy Somalia or Libya, Yemen to use as examples, or Syria or Iraq. But at the same time we shouldn’t be subsidizing and arming authoritarian regimes in countries either. One, because of the bad human rights records of those countries. But the practical reasons being that the behavior of those countries towards their own people just feeds extremism and gives it birth. And rebels who might be just as bad as their government reason to want to overthrow the current regime.

What America should do is when one of these authoritarian states falls like in Libya, Tunisia and Yemen and the rebels aren’t as bad or as the people they are replacing and want a responsible government instead, which is what we saw in Afghanistan even with all the problems that, that country has and still has, is work with the people there to build a responsible government and modern country. That can defend itself and create an environment where their people can thrive and succeed. Where foreign countries would want to invest and everything else that developing countries have to have.

If anything the last 15-20 years have taught us is that America can’t police the world by itself. That we are limited in what we can do and have to be smart with our resources and smarter with our resources than we have in the past. That we have to work with our allies and have to be smart with rebels that want to overthrow their regimes. That you can’t work with people simply because they are against the current government that you want to see out of office. Because the rebels might be as bad if not worst than the people before them. That we shouldn’t be subsidizing authoritarian states, but we shouldn’t be subsidizing terrorists and other authoritarians either.

America should be about promoting democracy and freedom liberal or otherwise in countries that actually want it especially if they don’t already have that. Not trying to force it on people who didn’t ask for it especially if they don’t have any history of it. When you don’t subsidize and arm authoritarian states and terrorists the people in those countries don’t have reason to want to hurt you. And as a result terrorists groups are going to have fewer people that they can recruit against you. Because people they would target don’t see you as the enemy and perhaps even as a potential ally.