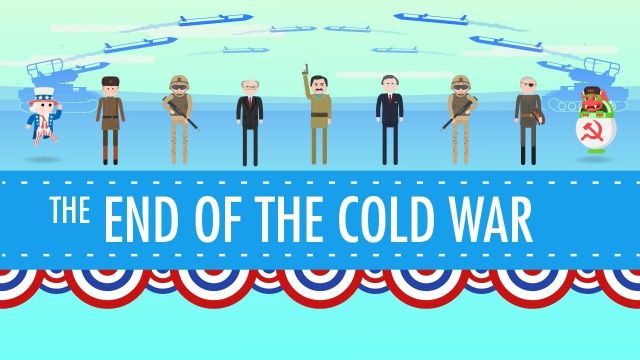 Source:Crash Course– with a look at George H.W. Bush.

“In which John Green teaches you about the end of the Cold War and the presidency of George H.W. Bush. It was neither the best of times, nor the worst of times. On the domestic front, the first president Bush inherited the relative prosperity of the later Reagan years, and watched that prosperity evaporate. That was about all the interest Bush 41 had, domestically, so let’s move to foreign policy, which was a bigger deal at this time. The biggie was the end of the Cold War, which is the title of the video, so you know it’s important. The collapse of the Soviet Union was the biggest deal of Bush’s term, and history has assigned the credit to Ronald Reagan. We give the guy a break, and say that he helped. He was certainly expert in foreign policy, having been and envoy to China, ambassador to the United Nations, and head of the CIA. Bush also oversaw the first Gulf War, which was something of a success, in that the primary mission was accomplished, and the vast majority of the troops were home in short order. It didn’t do much to address some of the other problems in the region, but we’ll get to that in the next few weeks. Along with all this, you’ll learn about Bush’s actions, or lack thereof, in Somalia and the Balkans, and you’ll even be given an opportunity to read Bush’s lips.”

George H.W. Bush is fascinating to me even if his personality comes off as more stale, which is surprising because he does have a very good sense of humor and is a very likable man. That people close to him are more than happy to let others know, but that was not the perception of him by 1992 when he ran for reelection. He was seen as stale and out of touch and someone perhaps not aware of what was going on in the country and around the world. And was seen as someone who was past his time and the country was ready for a change.

But even though I’m a Liberal Democrat I see George H.W. Bush as a successful and good president. I would give him an 8 or 8.5 as someone who was a transitional figure from a more hard-right president like Ronald Reagan at the end of the Cold War, to a Progressive New Democrat in Bill Clinton prepared to take America to the 21st Century.

President Bush was someone who took over when America was in pretty good shape at home and around the world. But because of the rising debt and deficit and interest rates and inflation and recession that was about to come in the early 1990s that he inherited, that is what defined his presidency.

In many ways the George H.W. Bush presidency is the presidency that his son George W. should’ve had. That G.W. Bush should’ve learned about and studied his father except being a former government and businessman paid more attention to domestic policy. While going back to his father’s foreign policy of strong at home militarily and economically while engaged around the world so we don’t have to even try to govern the world ourselves. Something by this time we weren’t cable of doing anyway. Instead of having this neoconservative supply side economic policy and force at all costs unilateral foreign policy.

The economic boom that America went through in the 1990s that started in 1993-94 had part to do with President Bush starting in 1990 with his deficit reduction act. That he negotiated with a Democratic Congress and the trade deals that his administration negotiated with Canada and Mexico that became known as NAFTA and GAT in 1992. The technology boom that became famous by 1995 or so with the internet and the cell phone and other devices started under his administration. As far as those devices being available to everyone. The internet and email were already up by 1992 if not 1991 and cell phones were fairly common by 1992 as well.

If you look at America’s foreign policy and how we were doing around the world, again with the end of the Cold War which meant America no longer needed such a large and costly military, which freed up other resources for other priorities. Saddam Hussein was in a box in the Middle East. Russia became an ally of America. Central America was becoming democratic and so was Eastern Europe.

President Bush didn’t try to govern the world, but to make sure we were ready to deal with all of these new allies and create new trade partners, which is what he did. His presidency was pretty successful, but not great and deserves more credit for being the president that he was.

1 Response to Crash Course: John Green- ‘George H.W. Bush and The End of The Cold War’