Keith Hughes: ‘What is a Conservative?’

Source:Keith Hughes– Ronald Reagan, is certainly one of the father’s of the modern conservative movement. 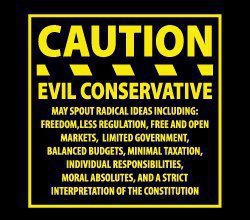 Source:The New Democrat– I guess what Socialists would view as evil.

I’m just going to give you the classical definition of conservative and conservatism and how you believe that relates today, that is up to you. Because I’m not so much into classical or modern when it comes to conservative, but what it actually means to be a Conservative.

And I go to Abraham Lincoln and look at least some of our Founding Fathers. Up to Calvin Coolidge in the 1920s, Robert Taft in the 1940s, Dwight Eisenhower at least to a certain extent in the 1950s, Barry Goldwater from the time he entered Congress in the 1950s, until time Senator Goldwater left Congress in 1987. And then I would go to Rand Paul today and the conservative libertarian wing of the Tea Party.

If words are going to matter, then so have to definitions, otherwise words are just words, sort of like a politician giving a speech, but not really saying anything. So when I look at the word conservative, I look at the word conserving. I know! Shocking right, the nerve of me, but that is what conservative means, someone who believes in conserving.

And the other way to look at conservative, would be someone who believes in moving conservatively: “Not so fast, Joe, let’s take another look at this before we decide where to go from here”. John Boehner Speaker of the House, fits that definition like a glove.

So a Conservative is not going to want to expand the government. At least not quickly and again they believe in conserving. So a Conservative won’t vote to repeal someone’s individual rights. And that gets to property rights and one’s money like with tax increases. Where a Conservative will tend to be against.

But that also gets to things as it relates to personal issues, like the Right to Privacy. A Conservative is not going to support limiting or subtracting those things. Why, because that fails two tests of being a conservative. Subtracting instead of conserving and expanding the role of government.

If you have heard Barry Goldwater’s line about big government, I suggest you do because it a must get as far as what it means to be a Conservative: “I’m a Conservative because I want big government out of my wallet, bedroom, boardroom and classroom”. So a Conservative is not going to support taxes hikes, property rights restrictions and regulations that put government in charge of running private organizations.

But a Conservative is not going to support at least ay the federal level laws that tell Americans, consenting adults who they can sleep with, who they can marry, what they can do in the privacy of their own home and how they can spend their own money.

“I believe in individual freedom when it comes to economic policy and big government as it relates to our personal affairs. Because Americans are smart enough to know what to do with their money. But not smart enough to know how to spend it on their own, or manage their own personal affairs”. Now you’re not a Conservative, but a pandering politician and propagandist. There’s what conservatism means to a non-Conservative.