Forget about me saying at risk of slapping myself on the back, because I’m just going to slap myself on the back so much, you would think I was being whipped with a belt by a gay lover. Because I’ve made at least part of the point over and over of what Bill Maher is saying here. We not only still have closet gays in America, but we have closet Socialists as well. We have Americans who say “I hate socialism, oh by the way, you even think about touching my damn Medicare, I’ll kill you”. And that is the nice version, but who do you think runs Medicare, Jesus Christ? Medicare is a socialist centralized federal government-run program that is financed through taxes that we the people pay.

But there’s even more, because we also have Americans who say they aren’t Socialists. They just speak highly of socialism and defend socialism, as if their lives or Unemployment Insurance depended on it. Sort of like the Christian fundamentalist preacher who says he hates homosexuality and that it is a sin. While at the same time he’s having affairs with men that his wife and ten kids don’t know about of course. But the difference being the closet Socialist on the Left, doesn’t have the balls to admit they are a Socialist. The person on the Right doesn’t support socialism broadly. So I’ll cut them some slack.

But the closet Socialist on the Left is a Socialist, perhaps knows they are a Socialist and just doesn’t want to admit it. Because admitting to being a Socialist in America or admiring it, is liking a man admitting he likes boys, or admitting to being a rapist or something. It is not socialism that Americans hate, but the word itself because it gets linked to communism and other leftist authoritarian ideologies. It is not that we don’t have Socialists or gay lovers of gay socialism in America. It is that we have Socialists who don’t have the balls to admit to what they are. And Americans who do not understand what socialism actually and look down at and people who actually admit they are Socialists.

Whether you want to call the lets say hard-core Left in America especially in the Democratic Party McGovernites, which is how they were labeled in the 1970s and 80s, or Progressive Caucus in the 1990s and even today, or the modern label Occupy Wall Street, these are the stuck in the closet with the door bolted down that an Army tank couldn’t knock the closet door down Socialists in America. The Bernie Sanders of this movement actually has the balls to admit he’s a Socialist and damn proud of it. But a lot of his followers don’t and go by Progressive, or what makes me want to try to ram a brick wall down with a head, I hate saying this but they some call themselves Liberals. 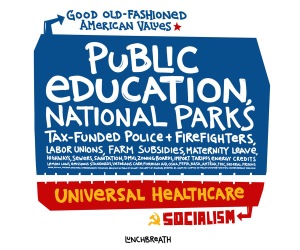 Blogger on everything that interests me and that I'm knowledgeable about.
View all posts by Derik Schneider →
This entry was posted in Real Time and tagged Bill Maher, Democratic Socialism, Democratic Socialists, Far Left, HBO, In the Closet, McGovernites, New Left, News Satire, Occupy Wall Street, Out of the Closet, Political Humor, Real Time With Bill Maher, Social Democracy, Social Democrats, Socialism, Socialists. Bookmark the permalink.