Posted on November 22, 2014 by Ederik Schneider 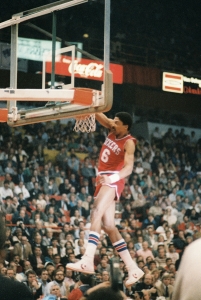 The Doctor is in The House

If you think about Dr. J as the dunker and watch all of his dunking highlights and that is all you know about him from mostly a basketball pop or hip hop culture perspective, what you know about Julius Erving is probably only what you’ve seen about him on ESPN or YouTube. And you are even too dumb or too young and perhaps both to truly understand the greatness of Julius Erving. Julius wasn’t a great dunker, but a great basketball player who also happens to be perhaps the best dunker of all-time. But that was just part of Julius’s greatness.

The Doctor of Basketball was also a great defender and a great rebounder. Think about it, 6’6 or 6’7 small forward with thirty-thousand career points and ten-thousand rebounds. How many other small forward have done that, no one else. A great man-on-man defender who could stop his man, but always knew what else was going around him. How did he get all of those great breakaway dunks, by playing the passing lanes and picking off passes and exploding to the bucket for those great dunks. Or running the floor with someone else feeding him the ball.

The Philadelphia 76ers of the late 1970s and early 1980s were perfect for Dr. J. Because they were a great defensive team that scored a lot of their points by taking the ball away from the other team and running the floor. Which fit Julius perfectly because that is how he played. And then add Moses Malone to the picture in 1983 and now you have a great defensive and breakaway team that now has a dominant force in the middle on both offense and defense and the 76ers became complete.

Dr. J became a great team player in 1983 with Moses Malone, because now he had another great player around him and no longer needed to do everything for the 76ers to win. And could rely on Moses and make his other teammates better and use them as well and just play his great all around game on both offense and defense. And what you had as a result are the 1983 Philadelphia 76ers as simply one of the best pure teams of all-time with Julius leading the way. And we got to see how truly great a player Julius was and he and the 76ers got the rewards of his greatness.