Journeyman Pictures: Video: The Real Story Behind the Clinton Scandals

The real story behind the Bill Clinton scandals was that most of them were bogus. The Lewinski affair and the China scandal from 1996 were the only real stories and so-called scandals for Bill Clinton as President, which is nothing compared with Ronald Reagan with Iran Contra and Richard Nixon with Watergate. Or go back to Lyndon Johnson lying to the country about America’s involvement in the Vietnam War and the progress of the war.

The hatred towards Bill Clinton from the Far-Right and other hyper partisans in this country, except for the race factor, is not that much different from the hatred that Barack Obama has received as President. What they hate about Bill Clinton is what they hate about Barack Obama. Which is what they both represent, two New Democrats on the Left who represent the changing of America that we’ve gone through as a country since the 1960s. With all sorts of new Americans having their freedom in this country. No longer restricted to living a traditional way of life.

The Far-Right in America lives in the 1950s. The rest of the country lives in the 21st Century as far as how Americans live in this multi-culture and lifestyle country where all Americans are free to be themselves. And no longer having to feel the need to hide who they are or try to be someone else. And when someone from this part of the country rises to power and becomes not just powerful and not just the most powerful person in the country, but in the world, the Fa-Right goes nuts and accuses that person of trying to destroy their way of life and seeks out to destroy them. 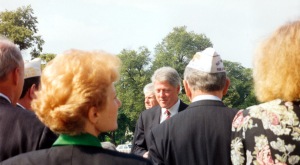 42nd President of the United States