If you listen to Senator Robert F. Kennedy talk about the Vietnam War in 1968, it is not that different from how Barack Obama sounded about the Iraq War when he was running for president in 2007-08. And how President Obama now sounds about the Iraq War now. “We can help and we should help where we can, but at the end of the day this is their country and their war and they need to fight it and win it if they can”. Just replace Vietnam with Iraq and you have two different men from two different generations talking about two different wars, but they sound very similar. 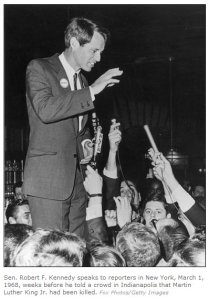