To write a blog about 1995 or even a satire about it I really have to go deep into my memory bank to remember what I think about that year. I was only nineteen at the time for most of that year. President Bill Clinton and Bill Maher touched on Vice President Al Gore’s reinventing government program that looked to save money in the Federal budget by making programs work better and consolidation. The OJ Simpson murder trial of course was big and if you watched anything on cable news that year, you would think that was the only story that year.

House Republicans wanted to gut PBS which the President touched on by saying that “PBS could only afford to send Jim Leher and not Robert McNeil because of the budget cuts”. They were the co-hosts of the PBS NewsHour in the 1970s, 80s, and 90s. The 1996 presidential campaign was already going on with Bob Dole the Leader of the Senate already the GOP frontrunner for president. And the Leader proposing to move Congress’s Senate sessions up to New Hampshire and Iowa so Leader Dole wouldn’t have to fly back to Washington as much.

I could go into the government shutdown that happened in the fall of 1995, the Oklahoma City bombing that happened in April 1995, but those things happened after this dinner and the people who performed that night performed before those events happened, so I’m not going to go into that. But just the first few months of 1995 with a brand new Republican Congress the first one since 1953 and House Republicans donating their lives to passing their Contract For America, you knew this was going to be a fascinating year. 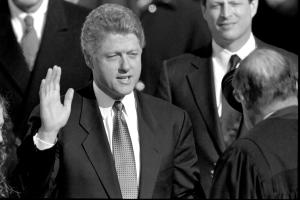 42nd President of the United States

Full-time blogger on a multiple ray of topics and subjects, because of multiple interests.
View all posts by Erik Schneider →
This entry was posted in Real Time and tagged Bill Clinton, Bill Maher, C-SPAN, Political Corespondents Dinner, President Bill Clinton. Bookmark the permalink.