President Gerald Ford trying to run as a Centrist in 1976 even though he had a pretty conservative in Congress as a Representative from Grand Rapids, Michigan and as House Minority Leader. And then had a pretty conservative record as President especially when it came to fiscal policy and taxes. But also as it related to foreign policy and national security. But Ronald Reagan saw President Ford as not tough enough when it came to Russia and foreign policy in general and was a basis for running against him in 1976. 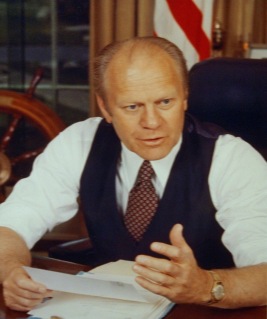