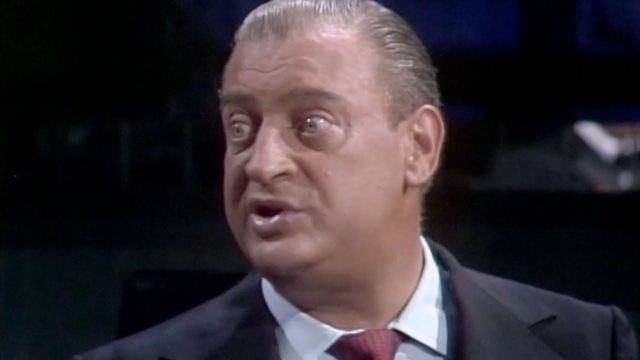 Source:Rodney Dangerfield– on The Dean Martin Show in 1972.

“My agent made a deal with The Dean Martin Show for me to appear on twenty-eight shows. I signed on to do some short skits—just me and Dean—and I would write all the material.

“Dean only came in once a week to tape his show—no rehearsal. (The set for our bits was always the same—me, Dean, a table, and two chairs.) For our first show together, it took Dean and me just three or four minutes to film our routine and we were done. “Okay, great, see ya next week, right?” Wrong. That was the last time I saw Dean. For the next seven Sundays, I flew from New York to California, went into an empty studio, sat down at that table by myself, and did four skits while talking to an empty chair. Later, the crew filled in shots of the audience laughing, and they filled in Dean Martin, too.”

0:08 “This afternoon my wife cracked up the car again. I was out driving with her, she told me she was gonna make a u-turn. I’ll tell ya, the letter she made… you’ll never find in the alphabet.”
1:56 “The day I was born, the doctor… he picked me up and smacked. I found out the nurse… she got a few in too.”

I never really got the Rodney Dangerfield no respect routine, I mean, I get it, but I guess I don’t agree with it. Rod is seen as a working class hero’s comedian with a very quick wit, a great sense of humor and a talent for  one-liners.  That is his background.  He is not Dean Martin,  Sammy Davis,  George Carlin, Richard Pryor, Johnny Carson or any of the other great comedians who have both great wit and  quick intelligence.  They kept up with current affairs and were always able to find the funny side in them.Rod is sort of the king of the one-liners.  They are mostly about his own life.  A central theme is his perceived lack of respect from others.  He used that routine to make a hell of a career for himself but he’s not in the same league as Johnny Carson and the others I listed above.  He’s simply step or two below them.  I would compare him to someone like Andrew Dice Clay or maybe a Nick DiPaulo.  Dice, I believe, was inspired by Rodney.  They have similar routines. Bill Cosby is a perfect example of a superstar comedian who’s at the top of heap, a so-called A-List  comedian.  At that next level, are comedians who are very funny and can always make you laugh but  the topics they cover, like everyday life or their own lives, put them a step or two behind the comedians who can make fun of entertainers, politicians, athletes, and or other celebrities because they keep up with those people and are very knowledgable about those subjects.

Rodney Dangerfield is at the second level, perhaps not B comedians but B+ or A-.  You can be a Hall of Fame athlete without being one of the top five players, or even in the top five percent of players, who ever played your sport, as long as you were one of the best of your era.  Rodney Dangerfield was a great comedian but not one of of the best all time.  He’s not quite in that elite group.