Posted on February 27, 2014 by Ederik Schneider

There is much more to Barbara Eden than her hot baby-face looks but it is really difficult for me to get past that and her role as Jeanie on the NBC hit 1960s sitcom I Dream of Jeannie. I have, I believe, three seasons of it on DVD, even though it went off the air about 5 years, before I was even born, but when I think of Barbara, or Barbie as I call her, I still remember that baby face she still has today as she now approaches the age of 80 years.

When it comes to sexy women and not just little baby cuties who look like little girls their whole lives, but sexy developed women who still have baby faces, Barbara Eden may be the cutest woman to ever come out of Hollywood.  If you combine that with great, quick comedic wit and timing and the ability to be adorable and funny at the same time while still knowing what the hell she is doing, you are talking about a great entertainer, with fans always coming back for more.

What comes to mind about Barbara Eden as well as her movies like Will Success Spoil Rock Hunter with Tony Randall and Jane Mansfield, Voyage to the Bottom of the Sea with Walter Pidgeon, Five Weeks in a Ballon, and other movies that I believe led to I Dream of Jeanie in the mid-1960s is that people appreciated her looks and her great comedic wit and timing. 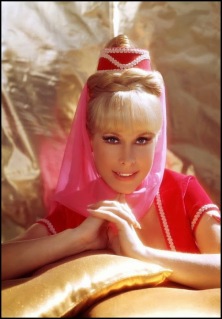 Blogger on a whole host of subjects.
View all posts by Ederik Schneider →
This entry was posted in Hollywood Goddess and tagged A&E Biography, Barbara Eden, BIO-TV, I Dream of Jeannie. Bookmark the permalink.