Playing an all-star baseball game at a football stadium. The Kingdome despite being fairly close to the action for baseball and a very loud stadium for both baseball and football, was basically a football stadium, because of its size, sixty-five thousand seats for football. And in the high fifty-thousands for baseball, but this was a great game. Where Pittsburgh Pirates outfielder Dave Parker who was a five- tool player up until the mid 1980s, throws out a baserunner from the outfield wall unassisted. Perhaps the best defensive play in MLB All Star game history.

For all the talk about this game being a slugfest with the lineups that both teams had and the stadium they were playing at, this game could’ve been played at Shea Stadium in New York, or Busch Stadium in St. Louis, Dodger Stadium in Los Angeles, Kaufmann Stadium in Kansas City. Because this was a pitchers duel with the Americans beating the Nationals 3-2. Goes to show you that great pitching, especially when that great pitching throws hard with control, will beat great hitting. Especially if those great hitters are expecting a big game because of the ballpark that they are playing at. 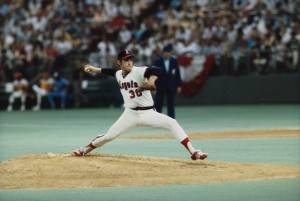 Blogger on everything that interests me and that I'm knowledgeable about.
View all posts by Derik Schneider →
This entry was posted in MLB Classic Games and tagged 1979 MLB All Star Game, 1979 MLB Season, Joe Garagiola, Major League Baseball, NBC Sports, NBC's MLB Game of The Week, Tom Seaver, Tony Kubek. Bookmark the permalink.