The current Republican governing policy is, “if Democrats are for it, we are against it, even if we are for it, or were once in favor of it”. And even offered it in health care reform a perfect example of that where the Affordable Care Act actually has a lot of good conservative ideas like the health care mandate and the health care market place in it. Which is the main reason why there hasn’t been much compromise in Congress between the House and Senate because when Democrats say okay we’ll agree to that, the House GOP just moves the ball further to get more compromises.

Then instead of Republicans saying okay let’s do that, Republicans just move the ball and say well, “if Democrats are willing to give us this, we can get them to give us this as well and hold off on a deal”. The deficit reduction negotiations are a perfect example of this where Democrats have put entitlement reform on the table and what Republicans is do is to say well, “if they will do that, then they’ll take exactly what type of entitlement reform we are interested in”. Like cutting Social Security benefits to future retirees or cutting benefits to current beneficiaries.

The only goal Republicans have right now is absolute power. And to accomplish this, they need to hold onto the House and 2014 and retake the Senate in 2014. To give them a united Republican Congress and to win back the White House in 2016 as well. While hanging onto Congress and the hard right partisan Republicans in the House and Senate have one clear strategy. “If Democrats are for it, it must be a bad idea even if it is our idea. So we are only going to put policies that are as far to the right as possible to get our partisan right-wing base behind us to avoid primary challenges”.

Which leaves us with gridlock when you have the Republican Leadership saying no to anything that the Democratic Leadership especially in the Senate and White House say yes to. Because now Democrats are in a position where they are only negotiating with themselves. Trying to find more moderate members in Congress to go along with some of these more conservative ideas in broader packages, while not losing any of their more, well lets say progressive members. Instead of negotiating with their own caucus’ in the House and Senate, along with Congressional Republicans. 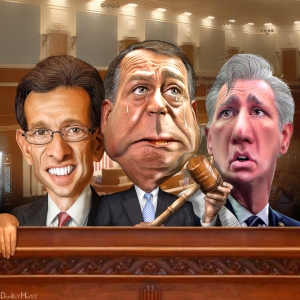