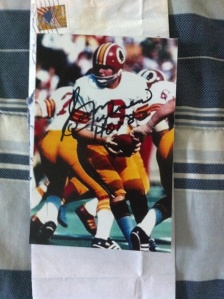 This post was originally posted at FRS Real Life Journal Plus

Sonny Jurgensen was clearly a better quarterback than Billy Kilmer. But Bill better fit head coach George Allen’s conservative offensive personality better. So George could say “see this is why we need to run more and Bill won’t take as many chances throwing the ball. Because his arm wasn’t as good as Sonny’s”. But a better head coach with perhaps a better understanding of offensive football, who didn’t have a conservative defensive mindset that George Allen had, would’ve known better. And what worked better for the Redskins offensively.

There are many horrible tragedies of Vince Lombardi dying and when he did. In 1970 at the age of fifty-seven when he could’ve probably coached another 5-10 years had he taken better care of himself. But one of those tragedies that Sonny paid the heaviest price for with the Redskins, was George Allen coming in, in 1971 as the head coach/general manager of the club. The Redskins did pretty well under Allen. Seven winning seasons, five playoff appearances, an NFC East title and NFC title.