Posted on September 10, 2012 by Derik Schneider 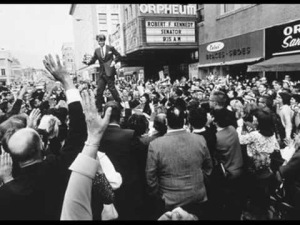 Senator Ted Kennedy, gave the best line of the RFK Memorial. Where he quotes bis brother by saying that, “some people see things and wonder why, I dream things that never happen and wonder why not.” Which goes to the heart of Bobby Kennedy’s idealism. Bobby Kennedy, wasn’t a hopeless Utopian who saw things that were simply impossible happening and would put these dreams in simple terms. But what he would do is see problems that the country is facing and see us as a country the greatest and wealthiest country in the World. With the resources to solve a lot of the problems that we face, as solvable and that we can and should solve these problems.

Because we are simply too great a country not to confront these problems, especially as a developed nation with the largest economy in the world. It’s not that we don’t have enough resources to solve our problems, but that we simply don’t use the resources that we have to solve the problems that we face. That perhaps the problems that we have are part in due to the fact that we’ve simply misused some of the resources that we have as a country. And we would be better off instead destroying other countries in the name of defeating communism, that we would instead build our own country at home. Bobby Kennedy, loved America and wanted to create an America that worked for everyone. Where all Americans could live in freedom and not have to live in poverty, or under racial discrimination.