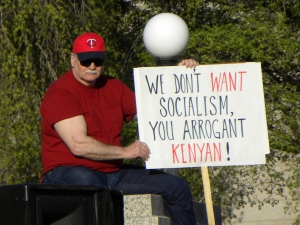 I no longer get angry when I hear right-wingers claim about how much Liberals are trying to destroy America or make America into something else we aren’t. Or trying to control how Americans live their own lives, I just find these claims hysterical. Because they tend to come from the Far Right. Religious and Neoconservatives, big government Republicans, who attack Liberals for believing in things that the Far-Right believes in, big government.

Senator Rick Santorum who voted for more federal Intervention in public education, voted to expand Medicare and make it larger, also voted to borrow 500B$ to pay for it, believes the Federal Government should be regulating marriage and running it, supports a Constitutional Amendment to outlaw pornography. I could go on, but I’ll spare you the rest and yet Senator Santorum and Michelle Bachmann who’ve taken the same positions on these social issues, call themselves Conservatives, people who believe in limited government.

Limited government that’s based on the U.S. Constitution , as well as Libertarians and yes real Liberals such as myself, you should listen to these people. Because they know what they are talking about. But when you listen to Neoconservatives like Rick Santorum, Michelle Bachmann and others, talk about the dangers of big government, take it with at least a couple of grains of salt, more like a jar, because it would like listening to a drunk alcoholic about the dangers of alcohol. “Look at me and how screwed up I am, believe me it’s not worth it”.
.