Washington Times: Editorial: “The Left’s War on Rednecks”: What The Far-Right and Far-Left Have in Common 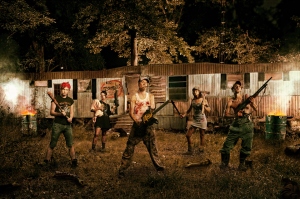 This post was originally posted at FreeStateExtra on WordPress

As different as the Far-Left and Far-Right might look in America, they actually do have one thing in common. They are full of bigots and live in small worlds. About the size of a bathroom at as gas station in the middle of nowhere. Love to see them meet at this gas station for a party. They would soon figure out how much they have in common and might even start loving each other.

Some so-called Progressives have this idea, that unless you’re for a big Northeastern city or California, and hang out at coffee shops and think men should bow down to women and let them run everything, you’re ignorant and backwards and probably a bigot who hates non-Christians and non-Caucasians. And if you’re from small town America, anyone from San Francisco or Los Angeles, Seattle, or big cities in the Northeast, you are Un-American and probably hate Caucasians. Perhaps especially if you think gay people should be treated like, well people. And if you’re not a Protestant, you’re a Jesus Christ hating Atheist.

So-called Progressives believe people who are not like them hate ethnic and racial minorities and probably women and homosexuals as well. If you’re from the South or rural America or small town America, in many cases you look down at people who are from big cities, especially in the North or California. But probably even in Atlanta, Georgia as well. And you see these people as Un-American Socialists who’s goal in life is to redistribute wealth from rich Caucasians.

And you believe these Socialists want to eliminate Christianity in America to transform it into an Socialist-Atheist state. Or the crazy Far-Right believes Barack Obama wants to transform America into a Socialist-Muslim state. And eliminate private enterprise and give all the money to minorities .And they love racial humor, except when it’s directed towards Caucasians.

Those are the fringes in America who don’t let facts get in the way of their political ideology. Who needs facts when people are dumb enough to believe you regardless? And you don’t trust news sources that actually report what is going on, especially when it contradicts you.

This is what America looks like, right now where the kids are calling the shots. Instead of sitting at the kiddy tables eating their kiddy meals. Meaning the fringes and have many power over their political parties. And the adults in the rooms, the Liberals for the Democrats and the Conservatives for the Republicans, sit at the kiddy tables instead and let their kids run wild and don’t stand up to Michael Moore and Rush Limbaugh. When they say crazy things, they end up making their parties look bad. “Wow this is how Democrats and Republicans now think”.

I’m a Liberal Democrat who just doesn’t say Dr. Martin Luther King is a hero of mind, but I take his dream seriously, where we could live in a World where we are not judged by the color of our skin, but by the content of our character. And that includes everyone, not just minorities, but Caucasians as well. Unlike today’s so-called Progressives and when racial jokes are made about Caucasians, I take them to be as bad as when they are made about African, Latin, Asian or Middle Eastern Americans.

There are people both on the Far-Left and Far-Right who like to speak highly of Martin King, but in a lot of cases just to make their ideological argument. And what they really mean is that, “MLK’s dream was really just about protecting us, not everybody. Racist jokes as racist pure and simple whoever they are targeted at. Whether they come from the Far Right, Far Left or anyone else.
.