The Atlantic: The Wire: Dino Grandoni: Jon Stewart Explains Comedy to FOX News: Like Trying to Explain Calculus to Fish 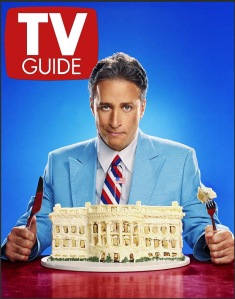 This post was originally posted at FRS Daily Journal on WordPress

The only reason for me at least to watch FNC or Fox News Channel and for that matter to be “fair and balanced”, MSNBC prime time on weeknights, is to find out what’s not going on in the World. To get some comic relief and perhaps some ideas for my political satire. Because FNC is basically the RNC, laying out the positions and the spin of the Republican base. And MSNBC prime time Monday-Friday, is basically the mouthpiece for so-called Progressive not Liberal Democrats.

The Democrats and so-called progressive third-parties, that don’t like President Obama and the Democratic Leadership. Because they aren’t “progressive enough” and aren’t socialist like themselves. Which is what they thought they were getting during the 2008 general elections. If you’re going to listen to FNC seriously, not to make fun of it, but to actually find out what’s going on in the world, do yourself a big favor, check at least two other credible news sources. Like a good reporter and you better know what that is before you take FNC seriously.

Because whether you’re listening to Megyn Kelly, Sean Hannity, David Asman and others, Bill O’Reilly to a certain extent, but he isn’t as bad as the others, He does take on both sides, you’re basically hearing what they want to tell you. What makes their political views look best and you’re hearing a lot of political gossip. That’s designed to hurt Democrats and that’s what you get from Rachel Maddow and Ed Schultz on MSNBC at the expense of Republicans. I swear I get more facts from The Onion something I read everyday than from FNC or Maddow and Schultz.

Because The Onion is seriously about news satire and doesn’t hide from that and they take stories that are true and make them as funny as possible by adding humor to them. When FNC says “Fair and Balanced”, you should take that as a joke that you would hear from The Onion. Because they are only “Fair and Balanced” to their own side.
.