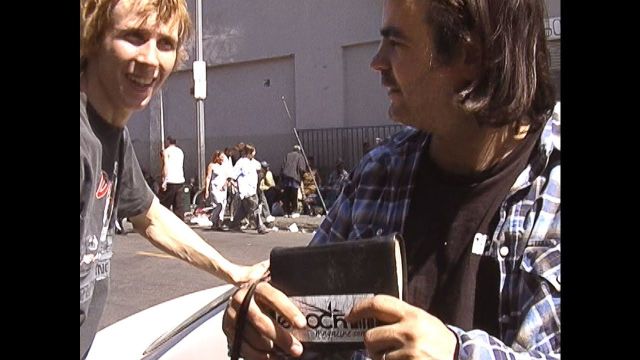 Source:Enoch Magazine– From a documentary about homelessness.

“In 2008, seven friends traveled to Skid Row Los Angeles to learn how to help the homeless via trial and error. The trip was not sponsored or funded by any church or organization. It was simply a mismatched group of Christians that were fed up with the norm and wanted to learn how to help the homeless. The goal of the trip was to break through the “red tape” of fear and planned preparation, (so commonly associated with a trip such as this). Hundreds were invited on this trip where ‘the plan’ was to have no plan. But only 7 responded. This Teaser is a preview to the upcoming documentary film, Skid Row Is Holy Ground. In this video, the team experiences the first 3 days going to Skid Row….a place they had never been before and didn’t know how to penetrate.

This homeless documentary about Skid Row is currently being edited to a full length movie. Go to:Skid Row Movie for the latest updates!”

Here’s an example of how we should be combating homelessness in America. By getting them off the streets and into motel rooms or small apartments. That could be financed through Section Eight Housing. Get them temporary financial assistance through Welfare or Unemployment Insurance. Instead of just giving them a meal and a cot and sending back on the streets the next day. This is what this project in Los Angeles is doing.

I’m not sure about the public assistance from government. Thats my approach, but what they are doing is getting them off the streets and into apartments. How they are financing the rest if at all, I’m not sure. But this approach is a hell of a lot better than what we did a a country in the 1980s. By kicking mentally ill people out of mental hospitals and sending them out on the streets. And then we saw a spike in poverty and homelessness in that decade. Which by in large was a very productive decade for us economically. And then we went to the give them a cot and a meal and send them on their way approach, which means they are still homeless, but with some food and one less night on the street.

This would be just my first approach to combating homelessness in America. Then I would move into health care, including mental health for those who need it. Including alcohol and drug rehab for those who need it. As well as education and job placement, again for those who need it. These things can all be financed through Public Housing, Welfare and Unemployment Insurance and Medicaid. As well as requiring the clients who benefited through these services to pay back what they collected, once they are on their feet. We wouldn’t have to create a new government agency to finance it. And figure out how to finance it. Homelessness is one big problem that we can solve as a country by just using our available limited resources better.