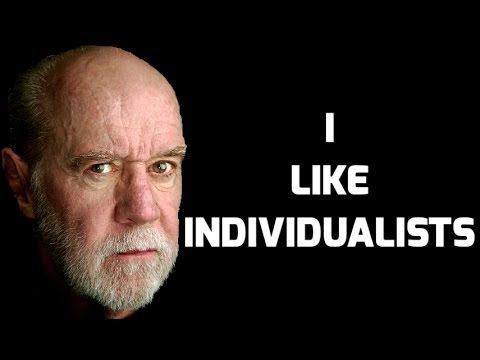 Source:George Carlin– So does Ayn Rand

“From ‘When Will Jesus Bring The Pork Chops.”

Before I get into George Carlin and what he thought about individualists and individualism, I need to mention a certain conversation that I had on Facebook last weekend and last week about my previous post about George Carlin, which fits into this piece, because it gets into what another thing that George George had in common with Ayn Rand. No Kidding: they were complete opposites on economic policy with Ayn being an Objectivist and George being what you could call as Socialist with how he thought about corporations and American capitalism, what’s known as identity politics today with how he thought about race in America and European-Americans. But they both believed in free speech, free thought, and personal freedom. They both believed in individualism, at least as it related to one’s personal affairs.

This guy attacked my piece and called me an asshole, for political correctness reasons and that I paraphrased Ayn Rand. Think about that for a second: a member of a George Carlin Facebook group, attacking posts in that group, because he views them as politically incorrect and that I paraphrased in my last piece. If you know anything about George Carlin, you know that he hated political correctness., loved free speech and free thought, reason, and individualism: so did Ayn Rand.

So unless this guy is simply not familiar with George Carlin, or perhaps had George Carlin mixed up with George Washington, perhaps George Harrison, or so other guy named George who is in love with political correctness to the point that he would screw it if he could, and hates Ayn Rand, because he hates free speech, free thought, free will, reason, and individualism, this guy simply doesn’t understand George Carlin at all and perhaps joined the wrong group on Facebook by accident. Maybe he was drunk or high one night or couldn’t sleep after drinking an entire keg of Red Bull and didn’t know what to do with himself and up on his computer and stared joining Facebook groups randomly.

If you wanted to know what the joke was that this guy in the George Carlin group thought was politically incorrect and the paraphrase of Ayn Rand that he didn’t like, I’ll tell you anyway: I made a comment about politicians last week saying that politicians especially Congress are less productive than people on Welfare and Unemployment. Which is actually a very true statement in way too many cases and their lack of productivity comes at taxpayer expense. Actually, people on Welfare and Unemployment are required by law to look for work, or be in job training or both. Members of Congress, already have jobs that are subsidized by taxpayers and they don’t bother to them in way too many cases.

But this guy hated that line about comparing politicians with people on Welfare and Unemployment, because apparently it’s politically incorrect and said that George Carlin wouldn’t like the joke either. Even if he’s right about George not liking the joke, he would at the very least defend the writer’s right to make the joke and not have to face legal or court action against it, simply because someone was offended by it, because again he hated PC and loved free speech and free thought.

As far as George Carlin and what he thought about individualists and individualism: again, this is something else that he had in common with Ayn Rand, along with free speech, free thought, and personal freedom, which is individualism. So again, what wrong with comparing the two, especially if you’re familiar with both? Yes, anyone who can read knows that there is no I in team, “but there is an I in individualism, independence, and integrity.” Again back to the smartphones: but if you bother to put down your smartphone for more than a minute, ( why don’t you go crazy and put down your phone for an entire 5 minutes and see if you’re up to that challenge ) you’ll be able to think for yourself and at least be able to examine for yourself what you’ve been seeing on your phone or computer, or TV.

When I was growing up, the worst grade that you can get in school was an F. The first letter in faddist is also f. I’m not saying that faddists, are the worst people in the world, especially if they also aren’t murderers, rapists, terrorists, crooks, or other felons, but they’re the less free and have the less freedom, because they’re only interested in what’s cool at the given moment and being cool. And will do, talk, dress, a certain way just to sound cool, because they want to fit in with the cool crowd, with whatever the hip clique is at the time.

But the individualist is a rebel, because the individualist, not only has brain but bothers to use it. And because of that is able to make their own decisions and do what’s right for themself at any given moment, because they’re not worried about being cool and popular and simply want to be judged for who they are as a person. Not based on what’s their favorite coffee drink, or how often they go to coffee houses, or do they go at all, what kind of cell phone they have, how up to date they are on celebrity culture and reality TV, ( if they’re interested in those things at all ) how they dress, how they talk, etc. But instead be judged by who they are as a person. The individualist, might not be the coolest person in the room, but they get the most respect and are the most trusted, because people know they’ll tell them the truth and at least be honest, as well as intelligent. Which I believe George Carlin would agree with.